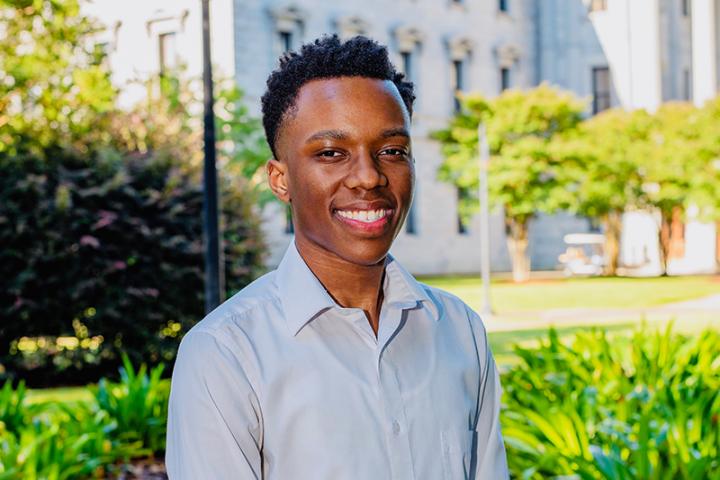 Daniel James II was drawn to the ILR School by an advertisement describing the way in which ILR combines education in the areas of social justice and business administration. With a bit of research, Daniel found that ILR would prepare him to pursue his interests in law and government, either as an attorney or as a public servant. Daniel knew that ILR was the right school for him, however, when he toured the school and learned more about the school’s emphasis on labor.

Daniel hails from Marion, South Carolina, a town that he considers to be a rural, Black working-class town. As Daniel, through ILR, began to understand the importance of the working class and particularly of Black laborers, he realized that labor is at the intersection of almost every issue in his hometown. For example, “if I look at how NAFTA has caused deindustrialization that led to the recession in my rural town, it is a labor issue.” Daniel wanted to learn about these labor issues more deeply, including workplace issues, policy, and employment and labor law, and he has been able to do so at ILR.

Last summer, Daniel was contacted by WVBR, a local radio station in Ithaca, with a request to develop a podcast show about Black students and issues on Cornell’s campus. Daniel learned podcast hosting skills from his mother, who is a journalist. Daniel’s mother taught him to interview, write, handle press releases and to speak on radio and television. Aside from these lessons, Daniel has always had a gift for public speaking. He used his background and this gift to speak on a radio show called “Organizing Your Life,” broadcasted through his church, which owns a local broadcasting station. Through this show, Daniel shared tips about all areas of everyday life, helping his local community and sharpening his broadcasting skills.

In response to the COVID-19 pandemic and racial injustice affecting Black Americans, Daniel created Black Voices on the Hill, a WVBR podcast show that features Black community members from the Cornell community and beyond. In each episode, Daniel and a guest explore topics of racism, police brutality, colorism and sexism in the contexts of Greek life, leadership and white elitism in the Ivy League.

Daniel aims to showcase a variety of guests on the show. He has spoken to government leaders including Ithaca Mayor Svante Myrick and Tompkins County Legislature Chair Leslyn McBean-Clairborne. Black students activists such as Sherell Farmer, Lotoya Francis and Laura Holland have been featured. Daniel plans to widen the breadth of the podcast by featuring Black entrepreneurs, creatives, athletes and alumni.

Daniel said his ILR education is what has prepared him to engage in the range of conversations happening on his podcast. “I never in my wildest dreams planned to major in ILR,” Daniel said. ILR, he said, “has been, by far, one of the best decisions I ever made because my ILR education has given me versatility in my conversations. Because of my ILR education, I can talk to lobbyists, grassroots activists, politicians and working-class people.”

Daniel shared responses to several questions as part of this story:

We tend to think of activists and organizers as being divorced from politicians and media platforms. You have the news that tells you the objective story, the politicians who are diplomatic, and then you have activists who are just raw and cutthroat and what I have realized is that there cannot be any sectors of society, especially in moments like this, who should not be speaking on issues that matter. And that all issues have to include the intersection of the working class and working people.

ILR has made me realize that no matter where you look in society, the one frame around it is work. Everyone needs to work, everyone wants to work, everyone wants to contribute in some way to society. I realized that that is the underpinning of what makes America America, whether you are talking about this country founded on the backs of slave labor or if you are talking about modern day manufacturing. ILR has changed my perspective on work and made me realize that nothing I do will ever be divorced from the workplace or the working class.

Within ILR, I do a lot of diversity and inclusion work. Since my freshman year, I have been on the executive board of the ILR Student Government Association and have served as the chair of diversity and inclusion. In addition to that, I am the VP of public relations in the Minority ILR Student Organization. I am also the director of educational resources for Students for Students, in which we mentor students at the Finger Lakes Residential Center. The thread throughout all of my leadership roles is diversity and inclusion work. Often in these places, I have found myself to be the only Black member sitting on the executive board. Although it can be a toll sometimes, I have realized that if we do not speak up for ourselves, we will not be prioritized.