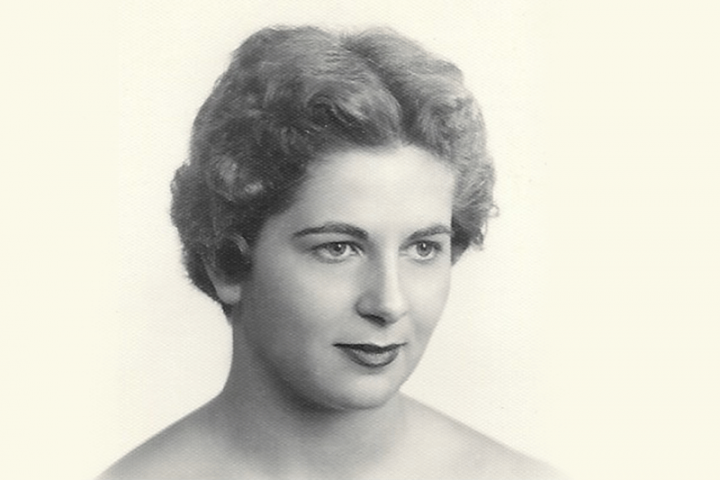 Barbara Loreto Peltz ’55 grew up in the Bronx in a union family – her father and an uncle were members of Local 3 of the International Brotherhood of Electrical Workers. The local was led by the Harry Van Arsdale Jr., who became president of the New York City Central Labor Council.

In an interview this year from her home in Sag Harbor, Long Island, Barbara described competing for the local’s $5,000 scholarship to the ILR School. It covered four years of college, and was named for a Catholic priest, Fr. William J. Kelly, who had been a member of the New York State Labor Relations Board.

Barbara was one of 10 finalists, celebrated with a luncheon at the Waldorf Astoria. But, she was not the winner. So, off she went to Bucknell University. A few months later, she received an unexpected call – the ILR scholarship was hers if she was still interested. She was. Loreto packed a trunk and arrived at Cornell in January 1952.

“My parents drove me to Ithaca. I was kind of spooked by the snow-covered campus with those huge buildings looming over the main street. They left me that Saturday afternoon at my dorm, Risley Hall. It was almost empty, except for a few other transfers. There was an invitation to dinner with the housemother, Mrs. Beale. The dining room was baronial It had a choir balcony and a raised dais on which the few of us sat and were served dinner. It was called ‘gracious living.’ We were served all our meals by dorm mates, which was a little awkward. Think they got free room and board.

“My first class that Monday was in the Quonset huts, which didn't loom. I had to wait in front of the class while the professor told all the students whose name started with letters after “LO” to move back one seat. That was approximately half of the 11 women and 54 men who apparently sat in alphabetic order. I was sent to the middle of a row of five. Still remember them: Joe LaFollette (the Wisconsin senator's son), Ray Lava, me, Al Mackie (a Local 3 officer's son) and baseball player Joe Marotta.

After class, Dick Schaap asked me for a coffee at The Straight. There, he told me why I had inherited the scholarship. I was shocked to hear that the man had died tragically. Dick calmed me down. He went on to become one of America's most famous sportswriters and a life-long friend.

ILRies took most of their classes together, she said, and were taught by memorable professors who were part of ILR’s first faculty.

“There was a small, but super, faculty who were very accessible, people such as Professor Maurice Neufeld, my adviser. ‘American Ideals,’ taught by Professor Milton Konvitz, was a campus-wide favorite. At my 65th virtual reunion last June, it was chosen by many as their favorite class.

“Accounting was at ILR and we had to end the class with balanced books, no matter how long it took. It was torturous working on old electric calculators which went to the eighth or more decimal place and could not be stopped except by pulling the chord. Worse yet, it was on Saturday morning.

Barbara remembers singing union songs at ILR every May 1, the date adopted by Socialists, Communists and others for celebrating International Workers Day. She also remembers people referring to the Quonset huts, where she took her ILR classes, as “the cardboard Kremlin.”

“Singing the union songs was mostly a spoof. I'm sure there were no Communists in my class. A good number of them were using ILR as a less expensive pre-law route and ended up as corporate lawyers. At the same time, Sen. Joe McCarthy was around from 1950 to 1954 and I remember that Cornell stood behind a professor who had been called to his committee. Oddly, he had gotten to the senate by defeating classmate Joe LaFollette's father.”

There was a camaraderie in ILR, recalls Barbara, who loved ILR’s bus trips to workplaces. She watched molten steel poured in a Bessemer steel factory and descended into a Pennsylvania coal mine after Professor Feltman soothed the Welsh coal miners.

“It was considered bad luck for a woman to enter a mine. Indeed, only a couple of women had come on that trip.

“The elevator for miners was open sided with a cable running down the middle. It had straps descending from the ceiling. We had been fitted with steel helmets with lights. Mine kept falling over my nose. I was too short to grab a strap, but my stalwart male classmates propped me up. The elevator fell like a rock and bounced.

“It was dark down there and surprisingly wet. Dripping down the wall. We were standing in it. And this electrician's daughter was alarmed to see a shoulder-high live wire running along the wall. It powered the cars used to take out coal loads. We walked a long way in to ever narrowing spaces to see the miners drilling holes for TNT. Time to go.” (Note to readers: TNT stands for trinitrotoluene, an explosive material.)

“It was a very different time on campus. For instance, there was a dress code: women could not wear pants or shorts unless necessary (ILR bus trips, playing tennis) and, if shorts, they should be covered by a coat. Men were required to wear shirts and jackets to class, except for one day a week, when they were in uniform for ROTC. The Korean War didn't end until 1954 and there was a draft.

“Men and women were separately housed. Women could not live off campus and weren't allowed to have a car until senior year. The payback for that was ‘the ratio.’ I was amused to hear Kiki Bader Ginsburg in an interview say that at Cornell she earned a bachelor's, a masters and an MRS degree. She went on to explain the MRS and allowed that it wasn't so difficult to do because of ‘the ratio.’ That is, there were four men to every woman on campus. I got my MRS in 1958 when I married Kiki's classmate, Leon Peltz '54 MD.”

After Cornell, as a sign of solidarity with the labor movement, Barbara asked Harry van Arsdale if she could work at union headquarters. On a drive from one of the Waldorf lunches, he took her to see Electchester, a housing development in Queens for Local 3 members that was being built under his leadership. Van Arsdale said that jobs were for workers who “had come up through the ranks.”

“My first job was in Manhattan on ‘The Employee Relations Bulletin,’ a weekly newsletter published by Prentice-Hall. I started as a researcher, which included visits to manufacturers in the Northeast. A little like ‘bus rides.’

“We obtained tips by going through many, many company house organs. Once, doing a story on ‘red circle rates,’ my editor was looking for a visual. I said I could do a ‘least squares curve.’ Thanks to the professor who taught ‘Wage and Salary Administration,’ that chart got me a private cubicle and a title. (Note to readers – ‘red circle rates’ are pay rates outside the limits of an established rate for a job.)

“I married Lee when he was a pilot in the Air Force stationed at Dover, Delaware. During my time there, I edited something called ‘The Air Force Officer's Wife.’ (YIPE). I encouraged Lee to move on to medical school, which was the original plan. For financial and adventurous reasons, he did that in Amsterdam, The Netherlands.

“Holland still had post-war problems and jobs were restricted to Dutch citizens, but luckily, Hilton was building a hotel in Amsterdam, and I got a stringer job there working in P.R. Lee transferred back to New York City for his clinical (last two) years of medical school, internship and residency.

“I worked for The Girl Scouts of America devising policies and practices for staff and volunteers nationwide. They had a whole building on Lexington in the ’50s, where all the bathrooms were “ladies rooms,” except on the 6th floor. That was the Financial Department – inhabited by men. (So much for feminism in a female institution.)

“Lee was awarded a National Institutes of Health Fellowship in gastroenterology, which took us to London for a year. On returning, I got a job at the Institute of International Education as assistant director of personnel. They had recently been organized by the State County and Municipal Workers. Finally – I got to be on a negotiating team.

“After our daughter, Jennifer, was born in 1970, I volunteered on the personnel committee of the Manhattan YWCA and the equal salary group of NOW. I became and alumni ambassador for Cornell and a Class of 1955 officer. Lee and I were contributors to the Johnson Museum. Between visits to campus for the museum, Lee’s '54 reunions, my '55 reunions, Homecomings and one presidential inauguration, Ithaca was so frequently on our radar that our daughter decided to go to Yale instead of Cornell. She felt that she had already attended Cornell.”