The report analyzes Vera House Inc.’s 12 Men Model, a program designed to engage men as allies in preventing domestic and sexual violence in their networks and communities. 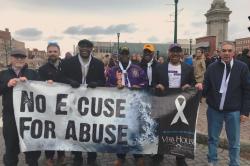 On Monday, September 20, the Worker Institute unveiled its report on a domestic violence prevention program at Vera House Inc. in a press conference in Syracuse. The report analyzes Vera House Inc.’s 12 Men Model, a program designed to engage men as allies in preventing domestic and sexual violence in their networks and communities. Researchers surveyed past program participants and found that after completing the program, men rethought their attitudes toward gender and masculinity and took action towards preventing abuse. The report concludes that the 12 Men Model has the capability to grow and could potentially aid in reducing violence in communities.

The 12 Men model is a program administered by Vera House Inc., a comprehensive domestic and sexual violence service agency providing shelter, advocacy, counseling services, education and training programs and community coordination that is located in Syracuse, New York. The 12 Men Model gathers small groups of men together to discuss and learn about issues of gender and domestic violence. It has engaged over two hundred participants over the last nine years. At the press conference, Onondaga County Executive Ryan McMahon and Syracuse Mayor Ben Walsh spoke and announced their participation in the 12 Men Model program.

The Worker Institute unveils a number of key findings from their survey of the program in its report:

In the report, researchers also included several recommendations for how Vera House Inc. could move its program forward and expand it to other spaces, such as the workplace. The report was written by Hunter Moskowitz and KC Wagner of the Worker Institute, along with Yasamin Miller of the Yasamin Miller Group.