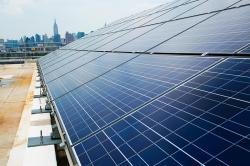 NEW YORK – Ahead of the fifth anniversary of Hurricane Sandy and in partnership with Governor Andrew Cuomo, leaders across state government as well as environmental and labor organizations convened a major summit on bringing 21st-Century clean jobs to New York. The Climate Jobs Now! Summit, which took place at the Cornell Club and was attended widely by labor and business leaders, focused on combatting climate change and reversing inequality in states and regions across the country.

In addition to a keynote address by Lieutenant Governor Kathy Hochul, speakers addressed a range of topics, including how to scale wind and solar energy, a just transition to clean energy and community resilience, and improving and expanding public transit.

"This is a proactive approach in how we transition to new energy sources and transition to a new economy. The labor movement is proud to be at the forefront of a better and brighter tomorrow both in terms of the environment and the creation of long-term quality union jobs to help build up the middle class," said Mario Cilento, President of the New York State AFL-CIO.

The Climate Jobs New York campaign can trace its spark to a three- year initiative convened by The Worker Institute at Cornell University’s ILR School, called Labor Leading on Climate. In the aftermath of the devastation caused by Hurricanes Irene and Sandy, The Worker Institute convened unions to open a dialogue over solutions to the climate crisis that could simultaneously support good jobs, worker protections and economic justice.

“Since Hurricane Sandy devastated New York five years ago, the scale and urgency of the climate crisis has only intensified. Today’s Climate Jobs Now! Summit represents a historic breakthrough as labor, government and environmental leaders come together to develop bold solutions to the climate crisis that protect working people and build a more equitable economy and society,” said Lara Skinner, Associate Director of The Worker Institute at Cornell University’s ILR School and Chair of the Labor Leading on Climate initiative.

"Climate Jobs NY is uniquely bringing together unions on the front lines of the changing energy economy to provide opportunities and offer solutions that respond to the needs of workers and realities of climate change. On the fifth anniversary of Sandy, the Climate Jobs Now! Summit is another big step forward for all New Yorkers," said Vincent Alvarez, President of the New York City Central Labor Council, AFL-CIO.

Initiatives under the Climate Jobs New York initiative include solicitations for as much as $1.5 billion in large-scale renewable projects, the first in a series that will develop 40 to 60 of these projects over the next few years, capable of powering 320,000 homes. Others include an expansion of energy efficiency and solar in public buildings, as well as other projects that demonstrate how we can address both climate policy and economic inequality through innovate jobs programs.

Climate Jobs New York (CJNY) is a growing coalition of labor unions united to combat climate change and reverse inequality. CJNY educates fellow workers, builds alliances, and advocates for policy solutions that demonstrate we do not have to choose between a healthy planet and good jobs.