State of the Artist: Challenges to the New York State Arts & Entertainment Industry and its Workforce 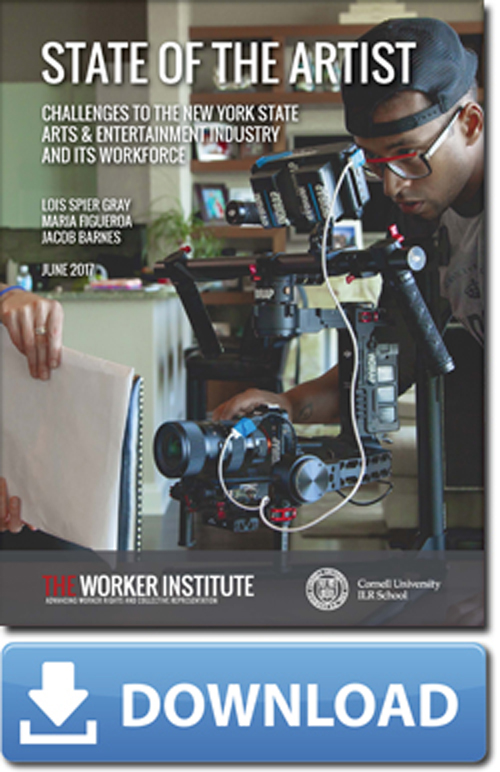 "Often left out of discussions about precarious work, workers in the New York State arts & entertainment industry continue to face high rates of contingent and project-based employment, low average income, and inadequate employment protections. State policymakers should consider strengthening economic and legal protections for arts and entertainment workers to ensure the continued growth of this indispensable industry to the state economy."

Click here to download the newly released report State of the Artist: Challenges to The New York State Arts & Entertainment Industry and its Workforce (PDF, 7MB)

State of the Artist draws from government surveys, industry reports, and interviews with key stakeholders to assess the condition of the New York State arts and entertainment (A&E) industry and its workforce, identifying key issues faced by workers in each sector of the industry. Trends in demographics, employment patterns, and income by A&E occupation are analyzed using comparable data presented in the Cornell University ILR School’s 2009 report, Empire State’s Cultural Capital at Risk? This analysis, including a conference attended by industry leaders and representatives to assess reactions to preliminary findings, served to identify current challenges facing this vital workforce to the state economy.  Often left out of discussions about precarious workers, many working within the AE industry continue to face high rates of contingent and project-based employment, low average income, and inadequate employment protections—all of which are explored here. State of the Artist concludes with a summary of public policies currently in place as well as those under consideration, providing an updated set of questions for New York policymakers.

For more information about this report, please contact Lois S. Gray at lsg7@cornell.edu or Maria Figueroa at mcf22@cornell.edu.

New York State is a world center for the arts and entertainment (A&E) industry and its vast and uniquely diversified workforce is its main competitive advantage. Funded by an appropriation from the New York State legislature, this report examines the strengths and the challenges facing this industry and its workforce in the state, identifying issues that offer a potential role for public and private policy.

Issues for Consideration by Public Policymakers

Findings of this report raise important issues for public policy with respect to the most effective methods for attracting and retaining the arts and entertainment industry, a vital contributor to the New York State economy. Issues suggested by industry leaders and reinforced by our findings include the following:

For details on each recommendation, please download the full report (PDF, 7MB).

The Worker Institute at Cornell, an institute of the ILR School, engages in research and education on contemporary labor issues, to generate innovative thinking and solutions to problems related to work, economy and society. The institute brings together researchers, educators and students with practitioners in labor, business and policymaking to confront growing economic and social inequalities, in the interests of working people and their families.