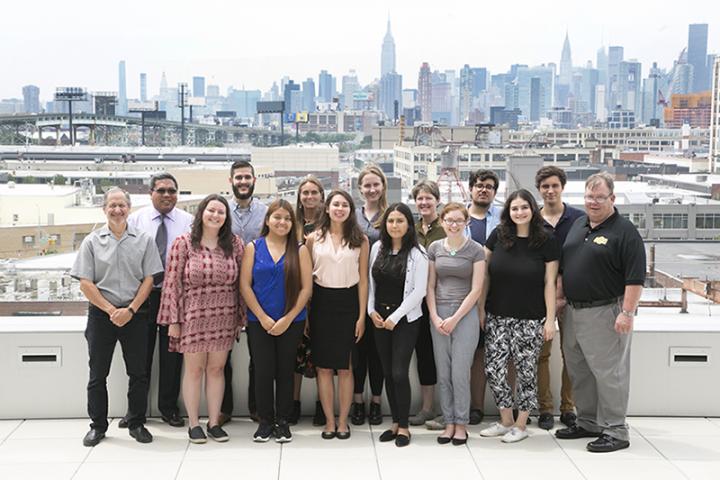 The tour, led by International Brotherhood of Electrical Workers (IBEW) Local 3 Treasurer Michael Yee, highlighted the work that electricians do to build New York City and exhibited the facility's capabilities for training workers, including in the growing renewable energy sector.

“We maintain all the street lights in New York City and the traffic signals,” Yee said. “The average citizen walking down the street at night doesn’t realize that they are able to walk safely and see where they are going because of the efforts of a Local 3 electrician.”

Rose Ann Bencivenga ’18, an ILR summer fellow working in New York City, said she was thrilled by the opportunity to view the training facilities.

“It’s amazing that the ILR summer fellows program offered us the opportunity to learn about the IBEW via a tour and discussion, and acquainted us with the extensive training and workplace practices of such a vital New York City workforce,” Bencivenga said. “My personal favorite part of the tour was going into the train track room, in which I got to touch a deactivated third rail.”

Lara Skinner, associate director of The Worker Institute and chair of the Labor Leading on Climate Initiative, studies the labor and employment impacts of climate change and the transition to a low-carbon economy on working people.

“The major question we’re facing today is: how do we make an equitable and just transition to renewable energies?” Skinner said.

“As we transition to renewable energy, we can’t leave behind the workers and communities who have helped power our economy with energy from oil, coal and gas. We need to protect and support them through this transition and make sure new jobs in low-carbon sectors are good jobs.”

The Labor Leading on Climate Initiative has played a critical role in convening unions in the building, energy and transport sectors to open a dialogue over solutions to the climate crisis that could simultaneously support good jobs, worker protections and economic justice.

“At this state-of-the-art training facility, IBEW is doing more than training workers on wind turbines and connecting solar panels,” Skinner said. “They are also thinking critically about how the future of New York City will be shaped by the renewable energy sector.”

The IBEW has a long-standing relationship with the ILR School through its role in the Labor Leading on Climate Initiative and other Worker Institute programs, but also in a scholarship program for the children of union members.

“We continue to provide a $30,000 scholarship to a child of a Local 3 union member who desires to go on to the Cornell ILR School,” Yee said. “There are very many talented and well-deserving students who are children of Local 3 members.”