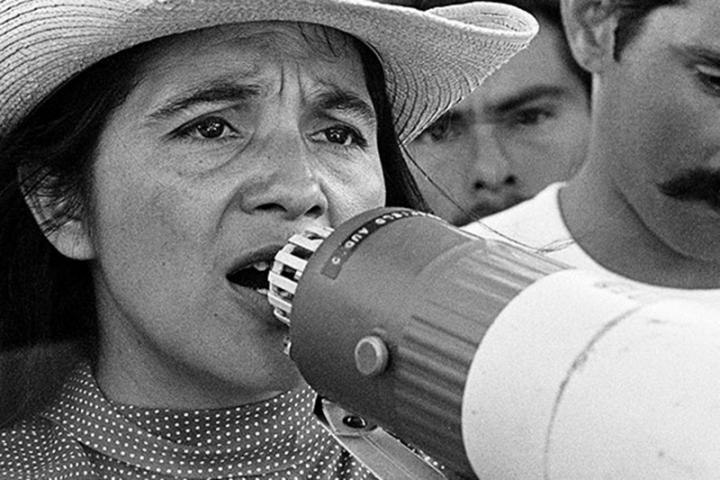 Beginning tomorrow, the Cornell Cinema is dedicating March showings to "Labor on Film."

The eclectic series of films examine labor and labor issues both past and present, several with a focus on feminism in the workforce.

March 1 the series begins with "Dolores," 2017, a documentary about the great Chicana labor activist Dolores Huerta, co-founder with Cesar Chavez of the United Farm Workers, who is still battling injustice in her late 80s.

March 8 is the Ithaca premiere of "Faces Places," 2017, by French New Wave legend Agnès Varda, working alongside photographer JR, both of whom share a radical passion for images and their creation and dissemination. Together they travel around the villages of France in JR's photo truck meeting locals, learning their stories and producing enormous portraits of them. The subject of the film, "is the heroism of daily life, the recognition of the daily labor and struggles of factory workers, farmers, waitresses, and, for that matter, women over all whose private roles in sustaining the public lives of their male partners go largely uncommemorated," according to the New Yorker. This film will be repeated March 11.

March 9 is the kick off for ILR and The Worker Institute's Union Days events with the screening of Russian director Sergei Eisenstein's debut feature "Strike!," 1925, a powerful film about a 1912 factory workers' strike and its violent suppression, which will be accompanied live by the Alloy Orchestra, performing their original score.

March 14 watch women in the classic blacklisted film "Salt of the Earth," 1954, which is based on an actual New Mexico mineworkers strike in the 1950s. The neorealist film follows not just their strike but how the mineworkers’ wives became involved as well, making it one of the first films to advance a feminist social and political point of view. The film will be introduced by members of the Eastern Farm Workers Association.

March 15, filmed much closer to home, is "The Philosopher Kings," 2009, a documentary celebrating the wisdom and humanity of eight custodial workers filmed at seven universities, including Cornell's James Evener and Gary Napieracz, who used to work at Cornell's Bailey Hall.

March 22, the last Ithaca premiere film is "Machines," 2017, a documentary that takes audiences into the labyrinthine passages of an enormous textile factory in Gujarat, India. Marrying stunning visuals with social advocacy, the film was the recipient of a Special Jury Award for Cinematography at the 2017 Sundance Film Festival.

The series is co-sponsored by the ILR School and Cornell's Graduate Student Union.

The screening of "Strike!" is additionally cosponsored with the ILR Worker Institute as part of Union Days, along with the Cornell Council for the Arts and the Cornell Department of Music.

Join your friends for the upcoming screenings. Learn more at http://cinema.cornell.edu/series_EarlySpring2018/labor.html.