After completing a summer on the High Road, many fellows find themselves back on Cornell’s campus with a stronger sense of initiative and involvement.

“High Road taught me skills for time management, organizing and leveraging relationships,” said Lauren Lang ‘17, the incoming Class of 2017 president. “I also was a leadership development fellow which allowed me to do a bit of research into leadership and mentorship that I found very useful,” added Lang, who spent summer 2015 interning with Open Buffalo.

Former High Road Fellows occupy a number of leadership positions back in Ithaca -- positions that range from class president and student organizer to orientation leader and political action chair.

FROM PPG TO THE KEY OF G 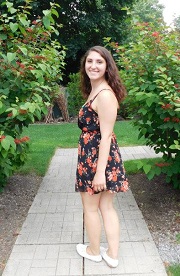 High Road Fellow with PPG, Deandra Fike ‘18 improved her public speaking skills, bettered her interview skills, and developed “the ability to command a room and be authoritative.” All of these skills, she said, have helped her in her role as Music Director for The Touchtones, an all-female acapella group.

When Jacob Cohen ‘16 returned to Cornell after a summer in his hometown of Buffalo, he used the leadership skills he developed working with PPG to better the Cornell Glee Club, an organization in which Cohen served as president. “My summer with PPG taught me all sorts of valuable lessons in how to develop one's leadership skills through community engagement,” Cohen said.

By leading a musical number or by leading the fight for human rights near Cornell’s medical campus in Qatar, High Roaders, using some of the skills they developed over the summer at an organization in the City of Buffalo, have been able to profoundly impact the Cornell community.

Maria Chak ‘18 is co-president of Amnesty International at Cornell University, a human rights organization in which four High Roaders serve on the executive board. In May 2016, Chak was also chosen to serve as the co-president of the Minority ILR Student Organization. This semester, AI@CU led dozens of concerned Cornellians into the Acting President’s office, demanding that Cornell’s administration intervene in the unjust detention of a poet exercising his right to free speech by Qatar’s government.

That initiative would have been impossible without the help of the environmental justice organization KyotoNOW! and the Cornell Organization for Labor Action, two organizations in which High Roaders either currently or formerly occupy leadership positions.

As a student organizers for COLA, both Caro Achar ‘18, who worked for Open Buffalo last summer, and Allison Considine ‘17, who worked with the Partnership for the Public Good in 2014, have been instrumental in many of the organization’s campaigns. Both have participated heavily in the group’s many initiatives, which range from pressuring Cornell’s administration to adopt socially responsible purchasing policies by ending contracts with Nike to pursuing justice for workers on Cornell’s medical campus in Qatar.

The resources offered during the summer to High Road fellows helped Considine become a better leader on campus. “The access to amazing mentors, the chance to shadow and question Buffalo’s leaders, and the space to pursue the projects that were most exciting to me within my placement” all helped her better navigate the world of campus activism, she said.

During his year as co-president of both KyotoNOW! and DivestNOW!, an organization committed to advocating for Cornell to divest from environment-harming fossil fuels, Cole Norgaarden ‘17 helped to shape the campus debate around environmental issues. While interning with PUSH Buffalo last summer, Norgaarden said that the High Road program helped give him guidance in his career pursuits. “I hope that the career-related skills I gained from that summer better equip me to take on more leadership positions in the future,” he said. This school year Norgaarden will serve as director of environmental justice for Cornell Environmental Collaborative – ECO.

Just this year, High Roaders were able to enact concrete change on Cornell’s campus. Amber Aspinall ‘17, the political action chair for Black Students United, saw her organization play an instrumental role in the termination of a Cornell contract with G4S Secure Solutions USA, a security company which BSU says has ties to the private prison industry.

AN AWARD AND AN  AMBASSADORSHIP

While Gabrielle Hickmon ‘16 served as a student ambassador for Cornell Engaged Learning and Research, she designed a ELR fellowship leadership position, created a course curriculum focusing on social justice, and was awarded in April 2016 the Community Engagement Trailblazer Award from ELR. Hickmon spent summer 2013 with the CWA Health Sciences Charter School, where she was able to developer her presentation and research skills.

ADVOCATING AFTER THE HIGH ROAD

As a member of the Every1 Campaign executive planning committee, Kristen Green ‘17 organizes discussion panels, photo campaigns, and public demonstrations to raise awareness of the importance of consensual sex on college campuses. Green, who worked with the Massachusetts Avenue project in 2014, also worked as the secretary for Cornell’s Black Women Support Network.

Jonathan Goldstein ‘17, who spent summer 2014 working with the Learning Disabilities Association of Western New York, now works as the president of the Cornell Union for Disability Awareness. In that role, Goldstein raises awareness and promotes acceptance of those with disabilities, advocates for accessibility on campus, and facilitates discussions on the issues faced by those with disabilities.

The many different organizations in which High Roaders are placed for a summer are wide-ranging -- Buffalo Niagara Riverkeeper, for example, is devoted to protection the quality of water in Western New York; BakUSA is one of the only companies to manufacture mobile computers on American soil.

But even though the experiences of fellows may differ greatly from organization to organization, all High Road Fellows come out of the summer with new skills that help them become better leaders on campus and in their communities.

“High Roads helped me become a better leader by improving my confidence,” said Erin Killian ‘17, a 2015 High Roader who now works as an orientation leader. “Being surrounded by an accepting, open-minded group of peers helped me to overcome my shyness and express my views more often.”