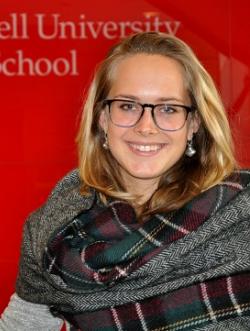 ILR Experience: Student Representative and Research Assistant, Scheinman Institute on Conflict Resolution Presenter, Cornell Undergraduate Research Board (CURB) Facilitator, Cornell Team & Leadership Center Student Ambassador, ILR Office of Admissions
Honore is “fascinated by the way people come together to negotiation and choose to work with one another towards a solution.” She is now a Fulbright Scholar pursuing graduate work in conflict resolution at National Chengchi University in Taiwan.

I transferred to ILR, in part, to pursue my interest in how people resolve conflicts. I connected early on with a student working on Bargaining for Better Schools (BBS), a multi-year research project, and was later able to work with him on it. I have had a fantastic experience working with BBS and the Scheinman Institute and have met so many fascinating people with careers in Alternative Dispute Resolution (ADR).

One of the greatest opportunities I had was attending the Scheinman Institute’s Board of Advisors meetings in New York City as a student representative. Being able to meet with leaders in the field of conflict resolution and watch them work together excited me and further attracted me to in this field.

I have taken ILR classes on ADR, mediation, and negotiation with many of the Scheinman professors, which has been fascinating. Marty Scheinman [who, along with his wife, Laurie, provided the naming gift for the institute] visited campus last semester and taught an amazing one-credit class on his experiences as an arbitrator. The institute also offers two-day student mediation training seminar which was a perfect hands on supplement to all that I have learned in the classroom.

Currently, we are studying New York teachers’ collective bargaining and Annual Professional Performance Review (APPR) agreements. APPR is a statewide evaluation system that began in New York in 2012. It is a major change for teachers because their employment could potentially be affected by consecutive poor ratings.

Teachers across the state are given their annual ratings but if they wish to appeal this rating they look to the appeals procedure of their district’s APPR agreement. Curious about the state-wide diversity of these procedures, we looked at about 700 contracts and analyzed them to further understand best practices for resolving APPR disputes.

The procedures involve a variety of actors, such as superintendents, union presidents and arbitrators, some of whom have the final say, however, the contracts differ between every school district. We found that about 55 percent of school districts use panels in their appeals procedure and about 77 percent give the superintendents the final say. This suggests that while teacher evaluations may still be considered controversial, there is evidence of collaboration.

I took part in a mock arbitration online with Rutgers University that was organized by the Scheinman Institute. Our Cornell team of Law School and ILR students was coached by Dan Bordoni ’75, MS ’77, who helped us prepare for the arbitration and focus on due process.

It was an interesting experience representing a management team that had fired an employee for punching a co-worker. Like many negotiations, it is easy go in thinking you know all the facts, but we quickly learned that both sides had information that everyone needed. Although the Cornell and Rutgers teams were acting in their parts, we presented the case in front of a professional arbitrator who discussed her true thoughts on the case. Mock arbitrations are fun, but also provide a professional platform to learn with peers in the field of conflict resolution.