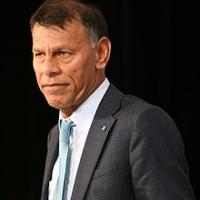 Yussuff emigrated to Canada from Guyana as a young man to work as a heavy truck mechanic[4] and soon found employment on the plant floor of CanCar, an automotive parts manufacturer, in Toronto[5] where he became a member of the Canadian Auto Workers (CAW). Within a year, he was elected plant chairman of Local 252 of the Canadian Auto Workers and later was elected plant chairman of the General Motors Truck Centre. He later served as a staff representative in the organizing and service departments before being appointed as Director of the CAW Human Rights Department. As such, Yussuff joined the CLC's Executive Council and then co-chaired the CLC Human Rights Committee.[6]

In 1999, he was elected Executive Vice-President of the Canadian Labour Congress and was then elected Secretary-Treasurer in 2002.[7] He remained in that position until 2014 when he challenged incumbent CLC President Ken Georgetti, defeating him by 40 votes at the CLC's May 2014 convention to become CLC president,[7] and the first person to unseat an incumbent CLC president.[8]

On April 20, 2012, Yussuff was elected to a four-year term as President of the Trade Union Confederation of the Americas.[9][10]