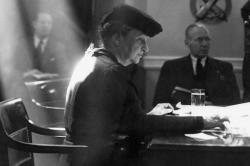 Frances Perkins, the pioneering New Deal-era U.S. labor secretary who joined the ILR School faculty in the early 1960s, will be featured in a PBS film premiering at 7:30 p.m. on Jan. 23 in 105 Ives Hall.

The public is invited to join producer Mick Caouette of South Hill Films for the screening and discussion. The film will air on PBS in March.

The first woman appointed to a U.S. presidential cabinet, Perkins was named to the position by President Franklin Roosevelt and held the labor post from 1933 to 1945.

She was behind the minimum wage, the eight-hour day, the 40-hour work week and unemployment insurance, and led the committee that wrote the report setting the stage for the Social Security Act.

ILR Professor Ileen DeVault said in a 2019 “Human Resource Executive” interview that many of the programs and policies put in place by Perkins are today considered “givens” and “not as things that workers used to not have and had to fight long and hard to get.”

ILR’s Kheel Center has a collection of Frances Perkins items, including this photo and lectures, including this 1964 talk that details reforms that followed the Triangle Fire, which she witnessed as a young woman.

See a preview of the film at youtu.be/Nw1JVD33iOE.