Sexual harrassment in the workplace, labor's role in the climate crisis, gig work and other topics discussed. 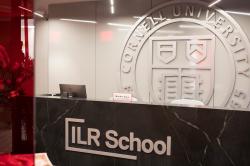 On Wednesday, June 26th, the Worker Institute hosted a conference with social scientists from around the world at ILR’s New York City office.  Discussions ranged from how sexual harassment trainings could be applied in rural areas to scrutinizing strategies for organizing gig workers across different countries. The conference highlighted opportunities for further collaboration with academics from Canada, the United States, Australia, and Europe.

The scholars participated as part of the CRIMT partnership. CRIMT is a research institution focused on work and employment that spans universities from dozens of countries. Researchers and faculty members listened to presentations on the field research and unique labor programs offered by the Worker Institute. Scholars were encouraged to ask questions and offer comments during the panel discussions on each project.  Rose Batt, Alice Cook Professor of Women and Work and Chairperson of the Department of Human Resource Studies, spearheaded the conference. ILR Dean, Alex Colvin, was also in attendance.

Worker Institute team members KC Wagner, Director of the Equity at Work Initiative, Sanjay Pinto, and Arianna Schindle along with Zoë West and Alecia McGregor, Assistant Professor of Community Health at Tufts University, spoke about gender and racial equity at work. The discussions centered on the Equity at Work Initiative’s recent projects. Projects such as the We Rise trainings for domestic workers, the results from the forthcoming report on sexual harassment in New York State, the Promotora peer to peer advocate campaign in the janitorial industry in Los Angeles, and issues of racial harassment as seen through the lens of a public health issue.

The workshop also highlighted the Buffalo Co-Labor program and its work on economic development through a segment led by Ronald Applegate, lecturer at the ILR School. The presentation focused on inclusive growth in community-labor partnerships, highlighting ILR’s work with the Partnership for the Public Good.

Using data from the Worker Institute’s on-demand platform report, Maria Figueroa, Director of Labor and Policy Research, illustrated the impact of the gig economy on workers in New York State. Scholars from across the world offered their thoughts on how the proliferation of app-based work has shaped working arrangements of their countries and the similarities to New York State. This presentation also highlighted the Worker Institute’s research and activities on day laborers in New York City. The conference ended with a conversation about climate change and the role of labor. Lara Skinner, Director of the Worker Institute, reported on the Worker Institute’s Labor Leading on Climate Change program. This work involves bringing labor leaders together to discuss ways to advance efforts that tackle the climate crisis while reducing inequality.

Throughout the day, scholars had the opportunity to examine labor and employment issues, while expanding their knowledge of work occurring in the field through the Worker Institute’s programs. As a partner institution in CRIMT, the Worker Institute will continue to foster similar collaborations. 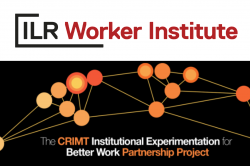