Understanding the Role of Workers at Tiananmen 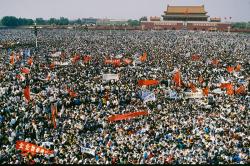 Eli Friedman, ILR associate professor of international and comparative labor and a scholar of Chinese state-labor relations, shared his expertise this week with the Voice of America as it reported on the 30th anniversary of the Tiananmen Square massacre.

On June 4, 1989, hundreds – some say thousands – of pro-democracy citizens were killed by government troops. Many of the protesters were students, and many of those supporting them at sites in and around Tiananmen Square were workers.

In this story, Friedman explains the ramifications of excluding workers from decision-making in 1989 and how the exclusion continues 30 years later.