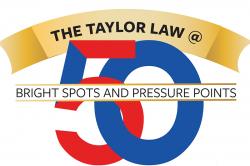 More than 400 people are slated to attend the Taylor Law 50th anniversary conference, co-sponsored by the ILR School’s Scheinman Institute, on May 10-11 at the Desmond Hotel and Conference Center in Albany.

The Taylor Law, passed by the New York State Legislature as the Public Employees' Fair Employment Act and signed by Gov. Nelson Rockefeller, went into effect Sept 1, 1967. It covered 900,000 employees and has impacted millions of workers during the past 50 years.

“The Taylor Law has been central to the development of labor relations in the public sector in New York for the past 50 years,” Associate Professor Ariel Avgar said.

“At the heart of the Taylor Law’s public policy objective is to balance the interests of public sector employees while also safeguarding the needs and interests of the public. As part of this balancing act, the Taylor Law established dispute resolution procedures to assist labor and management in case of impasse.”

“The 50th anniversary of the law provides an opportunity for the public sector labor relations community in New York state, labor, management, neutrals and scholars, to engage in meaningful discussions around the law’s contributions and consequences with an eye toward its role in a dramatically changing landscape,” Avgar said.

The theme of the Taylor Law at 50 conference, co-sponsored by ILR, the Public Employment Relations Board and the New York State Bar Association, is “Bright Spots and Pressure Points.”

“In keeping with this theme, the conference will provide participants with a comprehensive overview of the law and its varied effects on public sector labor relations and the many affected stakeholders,” Avgar said.

“The ILR School and the Public Employment Relations Board have a long tradition of collaborating around issues related to public sector labor relations and view this conference as another opportunity to work together in advancing scholarship, policy and practice,” Avgar said.

ILR research has included a focus on understanding the impact of the law over the past five decades. Ronald Donovan of the ILR extension faculty covered the early development of the Taylor Law by traveling region to region. His insights were documented in his book, “Administering the Taylor Law: Public Employee Relations in New York”.

The 50th anniversary program will include a panel of former chairs of the Public Employment Relations Board. They will reflect on their tenures and the meaning of the Taylor Law.

Katz said, “Grassroots-led teacher strikes in West Virginia. Oklahoma and Arizona remind us how critical it is to get the regulation of public sector labor relations right, adding to the timely nature of this conference.”