ILR collaboration shines a light on the importance of workplace practices and relationships in how individuals view sexual harassment. 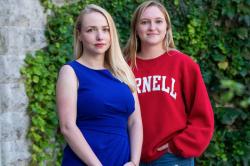 For years, researchers have studied a range of individual differences in attempts to find a link between demographic factors and the variation in people’s perceptions of sexual harassment.

“The fact that researchers have largely taken the workplace out of the equation and said the context doesn’t matter is just astonishing to me,” said Phoebe Strom, M.S. ’18, Ph.D. ’21. Her work with Kate Ryan ’20 has led to new research suggesting that an individual’s workplace, employment history and industry are significant factors in how they view sexual harassment.

“I think the results of our study clearly show this is a huge oversight,” she added.

What could be a significant piece of research started nearly four years ago as Ryan took an “Introduction to U.S. Labor History” class where Strom was the teaching assistant.

Despite the fact that more than 100 students were in the class, it was taught in smaller sections with small group work and required office hours that allowed Strom to connect with Ryan.

“I had plenty of smart students, but there’s a difference between being a good student and being someone that would be good at research,” Strom said. “The students who stood out were the ones that were really engaged and asked interesting questions that showed they had the capacity to wonder. I saw that coming from Kate.”

When the course was over, Strom asked Ryan and about 10 other undergraduates if they would like to apply for an independent study with her as the mentor, under the guidance of Associate Professor Ariel Avgar, now also ILR’s associate dean for outreach. The “independent” course, which ran through the Scheinman Institute, was non-traditional with four undergraduates in the class learning how to do research, and while the overarching topic was conflict resolution, each had the opportunity to develop their own separate projects.

“It was the first time I was involved in an independent study course using this model,” Avgar said. “I think it’s a great way to get students involved in doing research early in their academic careers on projects that matter to them. There are ways in which doing research exposes them to a methodology that can be helpful even if they don’t pursue graduate work. Part of our strength at ILR is having faculty engaged in meaningful research, so we’re striving to make that part of the undergraduate experience here at Cornell.”

Over the course of the class, while learning the different methodologies of research, Strom helped Ryan develop her project – "Perceptions of Sexual Harassment."

“It was a very #MeToo time and sexual harassment was being given a lot of attention,” Ryan said. “I was wondering, ‘How can we fix this?’ A lot was happening at the workplace, but it was non-traditional workplaces because it was movie stars coming out. I was thinking if these really famous people are having these experiences and issues, it must be happening to the average worker.”

Ryan, whose mother, Cathy Creighton ’87, is a lawyer, was fascinated by how people define sexual harassment “in their own heads and how they use that definition in the workplace.”

“I came at it from the law standpoint because there are laws about sexual harassment,” Ryan said. “So, why do people see it so differently when there is this set definition in the law?”

With the guidance of Strom and Avgar, Ryan pursued the topic after the course ended by applying for an ILR Summer Undergraduate Research Fellowship. The stipend allowed her to stay in Ithaca for the summer and work on a survey – creating sexual harassment vignettes that featured a range of severity – that would be used to further her work.

“Professor Avgar, Phoebe and I all had different things we wanted to test, so we had this huge bucket of questions,” she said. “We didn’t want to prompt people into our definition of sexual harassment. We wanted to see what they thought.

“So, we presented those situations and saw how they reacted. From that, by knowing how they viewed sexual harassment, we tested all these other factors – does your age, sex, position or industry influence how you perceive sexual harassment. What if you're a member of a union, does that change your perception?”

The survey results were returned to the team in a large data set and Ryan spent the first semester of her junior year “cleaning” the data before handing it off to Strom.

“As a researcher we hypothesize these things about the world and there’s always that moment when you have your data and you're going to find out if the things you think are actually real,” Strom said. “Because the topic was sexual harassment, it was a little conflicting. We want the data to come out and support our hypothesis because we're researchers and we think what we're saying has merit. On the other hand, as a human being you're thinking, ‘I don’t really want this to come out because I would rather that people agreed on what sexual harassment is.’”

After analyzing the results, Strom produced “Drawing the Line: How Workplace Experiences Influence Individual Perceptions of Sexual Harassment.” The paper, which she hopes to submit for publication at the end of the semester, detailed Ryan and Strom’s research, which found that workplace factors mattered in people’s perception of sexual harassment more than any other factor.

In the paper’s abstract, Strom explained:
Utilizing eleven anonymized scenarios, we surveyed a crowdsourced sample (n=408) of currently employed adults and found that—as with other organizational phenomena—what individuals label as sexual harassment is shaped by both formal employment relations practices and informal relational norms. Specifically, we highlight the influence of employment status, unionization, grievance procedures, dating policies, high rates of work travel, workplace informality, and highly sexually harassing industry cultures (as measured by rates of sexual harassment complaints) … Our findings suggest that successfully combatting sexual harassment may hinge on cultural change in the industries with the highest rates of complaints as well as efforts to improve employment relations and reduce precarity more broadly.

Strom presented the paper at an ILRLR/ICL Workshop Series where faculty, graduate and undergraduate students were able to ask questions and give suggestions to help shape the direction of the paper’s next iteration. To get there, Strom has earned an ILR Theme Project Grant, which will help fund interviews with individuals.

Established in 2017, theme projects began as a way to provide opportunities for ILR students, staff and faculty to work together on important topics that transform the future of work.

“I think the multiple pieces that have gone into this is an example of the good work we’re doing here at ILR,” Avgar said. “Starting with a personal connection made in the classroom, to an independent study that connects a student to faculty. Then to go from those connections to utilizing research grants. There are multiple touchpoints and together they’ve advanced some nice research.”

While Strom plans to use the paper to continue building her reputation, Ryan recognizes that she’s had an irreplaceable opportunity.

“I think a lot of people do research on campus, but I’ve never heard of anyone having an experience that was so self-driven,” Ryan said. “That a Ph.D. student like Phoebe would take an interest in helping an undergraduate seems pretty unique to ILR. I know there are opportunities across campus to work with professors on their research, but it’s their topic and you’re just assisting. This was totally different. Phoebe took this on herself to mentor me, and it was a lot of work. This was an idea I came up with and she made sure I could do it.”

“They essentially gave me complete freedom to pick my task and then gave me all the resources to learn how to do it.

For more information on the study, visit: https://www.phoebestrom.com/research.