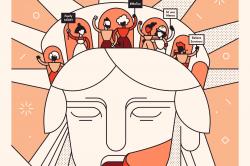 Stopping Sexual Harassment in the Empire State: Past, Present, and a Possible Future

This report maps current patterns of workplace sexual harassment and their impact in New York State using data from the 2018 Empire State Poll, a statewide survey of New Yorkers conducted by the Cornell Survey Research Institute. In addition to sharing the survey findings, the report provides a broader frame for understanding how efforts to confront sexual and gender-based harassment and assault have evolved over time, and charts possible directions for future organizing, policy, and research in New York and beyond. It highlights the experiences of diverse survivors and their efforts to effect change in specific industries; black women’s leadership in propelling shifts in law and culture; and culture change work engaging men and women as allies.

Learn more about New York-based organizing, advocacy, and policy referenced in the report: