Speaking with an Uber Driver about the COVID-19 Crisis 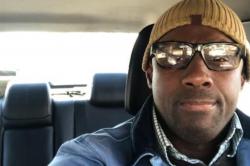 It was with some hesitation, in late 2017, that Amara Sanogo finally gave up the keys to his yellow cab. Toward the end, “I could barely pay for my cab rent. Uber had just come into the airport and started taking customers,” he recalled. “So I had to switch. ‘If you cannot fight them, you have to join them.’ I followed that rule.”

Sanogo began to drive for Uber and Lyft, mostly in the Bronx, where he lives with his wife and three young children. He also joined the New York Taxi Workers Alliance, which helped him deal with traffic tickets and advocated for drivers’ rights. On the apps, each fare was so cheap that he had to work long hours nearly every day. He earned enough to cover his bills, but saving was impossible. 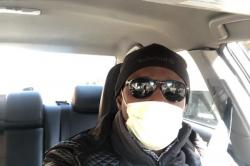 Everything changed in mid-March, when the coronavirus came to town. Business slowed, then froze, and word of sick colleagues began to circulate on WhatsApp. “I know a lot of drivers who’ve passed away in the African community,” Sanogo, an immigrant from Côte d’Ivoire, said. “Two drivers I know very well, they passed away. One from Ghana, one from Guinea. I still have their pictures on my iPhone.” Sanogo stopped working on March 27. “I decided to stay home. My wife was very scared.”

He applied for unemployment benefits in early April, joining tens of millions of jobless Americans seeking help. But Uber and Lyft withheld their drivers’ records from state authorities, and Sanogo heard nothing about his case well into May. Meanwhile, the New York Taxi Workers Alliance fielded thousands of calls and tried to sort out a shifting landscape of state benefits and federal pandemic unemployment assistance. 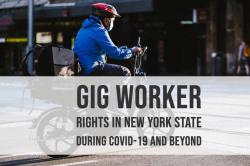 Gig-economy workers lacked protections that most regular employees enjoy under existing legal frameworks. As such, they were already more vulnerable to the consequences of economic downswings and workplace safety risks. The current crisis exacerbated these vulnerabilities. This calls for an evaluation of the policy and organizing solutions proposed and developed before the outbreak, and for the need to adjust such solutions to the new realities of the workplace caused by the COVID-19 crisis.

Learn more about how gig-economy workers are bring impacted by the COVID-19 crisis. The Worker Institute is hosting "Gig Worker Rights in New York State during the Covid-19 Crisis and Beyond," a free webinar on Thursday, May 14, 2020 at 12:00pm. Hear Senator Robert Jackson, Senator Jessica Ramos, Steven Greenhouse and more discuss policy and organizations for workers in the #gigeconomy during the #COVID19 crisis.

Event sponsored by the Lois Gray Innovation Initiative. Lois Gray was a pioneer in the field of labor education, she recognized the vital role The Worker Institute plays in creating a unique space for labor leaders to learn, explore, examine and experiment. The Initiative's goal is to bring together labor leaders, union members, scholars and other allies to advance innovative ideas for protecting and expanding workers' rights. Learn more.