Hundreds of ILRies celebrated at Homecoming 2018. 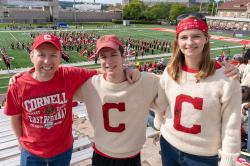 Rachel Chiu '19 said Homecoming is one of her favorite traditions because the Cornell and ILR networks are visualized in a colorful way -- students and alumni are brought together by the experience to celebrate their shared heritage.

“This year's Homecoming game was the most exciting in my four years. It was an Ivy League match-up with Yale, an excellent team. Although we did not win, it was a close game. My friends and I enjoyed watching and, as a resident adviser, I loved cheering on some of my former residents!”

Homecoming is a broad space where the Cornell community pays homage to its Ivy League foundation. While studying here, students become part of the Cornell family, then carry their values into their careers. Many return for Homecoming, a festive pause colored by red and white, a dancing brown bear and pride in the institution.

Jennifer Thurston, assistant dean of ILR alumni affairs and development, along with her staff, hosted a tailgate under a white tent, one of many that filled the Schoellkopf Stadium crescent. Alums, family members and students gathered there to catch up, enjoy a lunch buffet and pick up umbrellas, caps, T-shirts and other giveaways emblazoned with ILR’s new branding.

ILR students outfitted in Homecoming T-shirts chanted for Big Red at the game and ILR students who are members of the Cornell Big Red Marching Band performed before Cornell football players ran onto the gridiron.

Look at Cornell Homecoming photos depicting the excitement of the day.