Returning to the High Road 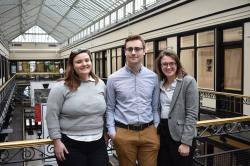 Cornell ILR Buffalo Co-Lab and the Partnership for the Public Good are excited to welcome back three High Road Fellows for the inaugural “Winternship” Program. Former High Roaders are returning to Buffalo over their January break to build on their previous work, and continue to fight for justice and equality in Buffalo Niagara.

Lillian Kahris (High Road 2016) is a senior in ILR from Buffalo, NY. Her past High Road placement was at Buffalo Arts Studio, where she spent the summer conducting research on the role of public art in economic development. She is spending her winter break at PPG working on a landscape analysis of successful community benefits agreements with financial institutions across the country. On campus, Lillian is a Worker Institute Fellow exploring the connections between the portrayal of women’s work in fiction, and historical societal values. Additionally, she works with the Upward Bound program and serves on the executive board of the Women’s Resource Center.

Genavieve Koyn (High Road 2018) is a sophomore in ILR from Grand Island, NY. She spent her High Road summer at Say Yes to Education, where she worked on the Community Schools Initiative. She is excited to return to PPG and get involved with the community agenda rollout scheduled for later this month. On campus, Genevieve is a public service scholar, a member of the policy debate team and on Student Assembly committee on city and local affairs. In her free time, she volunteers in public schools in and around Ithaca.

Victor Rieman (High Road 2018) is a sophomore in the ILR School from Ellicottville, NY. Last summer, he was a member of the High Road Fellowship and worked with the Western New York Law Center to create a funder's report for the organization. This winter he is returning to the Law Center in order to work with the Buﬀalo Niagara Community Reinvestment Coalition (BNCRC). At Cornell, Victor competes as a member of the Cornell Speech and Debate Society. He is also involved with several advocacy groups on campus, including the American Civil Liberties Union, Cornell Democratic Socialists of America, and Cornell Political Union.

This inaugural Winternship Program is generously supported by Engaged Cornell