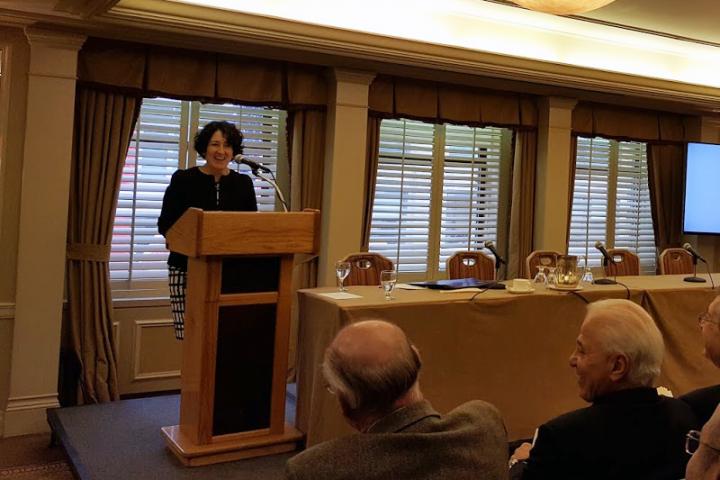 Mayor Bill de Blasio celebrated the 50th anniversary of New York City’s collective bargaining law at a conference co-sponsored by ILR’s Labor and Employment Law Program and the Office of Collective Bargaining, which was established by the law.

“Even as labor is under fire in so many ways, if anyone wanted to look at what relative harmony and peace and partnership looks like between labor and management, they can look right now to New York City government and see a great example,” the mayor stated during the June 8 event.

The collective bargaining law established a tripartite structure that enables New York City public sector unions, New York City as an employer and neutrals representing the public to negotiate labor agreements and resolve labor-management disputes at the table and not in the streets.

ILR's Associate Dean of Outreach and Sponsored Research Linda Barrington emphasized the philosophy shared by both the Office of Collective Bargaining and ILR, when she said, "both ILR and OCB were created with the belief that employers, employees and society at large have their common interests best served by establishing problem solving approaches based on mutual respect, collective bargaining and mediation and arbitration.”

Susan Panepento ’85, chair of the Office of Collective Bargaining, commented on the positive role ILR has played educating and training union members and officials, and New York City managers and neutrals who have contributed to making the city’s tripartite collective bargaining law a success.

This agency plays a crucial role in addressing workers’ concerns according to Harry Nespoli, chair of the Municipal Labor Committee and the president of the Uniform Sanitationmen’s Association, Local 831, which represents 6,500 sanitation workers.

He told the Cornell Club audience of 180 that “The idea is when you can go to Bob Linn, the commissioner of the Mayor's Office of Labor Relations and sit down and try to negotiate something and it is not resolved, you have the right to go to the Office of Collective Bargaining." This is pure gold, he told the audience.

When de Blasio entered office, all of the city’s collective bargaining agreements had expired, most for three years and some for even longer. To date, contracts covering 99.6 percent of a municipal workforce that numbers more than 375,000 employees have been finalized without work disruptions.

One recent achievement was an historic agreement, Linn said, between his office and the Municipal Labor Committee that resulted in $3.4 billion in health care savings. The groups overcame trust issues by bringing in independent actuaries to analyze health data.

Linn said that the collective bargaining process “is fragile and we must be vigilant … [and] we must never revert to the disrespectful antagonism of the past,” Linn said.

Alan Viani, a union leader who became an impartial member of the Board of Collective Bargaining, also spoke at the event. In 1965, he and eight other union leaders spent 12 days in jail for refusing to order 9,000 social service employees who were on strike back to work. That strike eventually led to Mayor John Lindsay signing the New York City Collective Bargaining Law in July 1967.

Viani ended his presentation with a plea, “So, I’m imploring all of you that this institution works well for employees and the city, and it must be protected and preserved,” he said. “Don’t let them steal it from us.”

A history of the Office of Collective Bargaining prepared for the conference can be found at http://www.ocb-nyc.org/news/50th-anniversary-celebration/.