New ILR research shows that workers who signal their independence from other people, rather than how socially connected they are, are judged to have more creative potential. 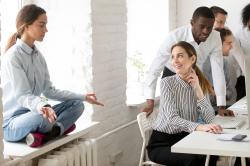 Those who are seen as relatively less social and more separate from others are judged as more creative when compared with those who are seen as relatively more social and connected to others, according to findings by Assistant Professor Devon Proudfoot and Assistant Professor Sean Fath. The duo’s paper, How Perceived Social Connectedness Influences Judgments of Creative Potential, was published in July in “Personality and Social Psychology Bulletin.”

In the paper, Proudfoot and Fath assert that, “being recognized as someone who is highly creative brings valuable opportunities and rewards. Creativity is prized in today’s knowledge economy, with U.S. employers citing creative thinking as one of the abilities they need most in their employees. Given the premium placed on creativity, communicating one’s ability to think creatively is likely to be advantageous.”

The pair ran a series of five experiments to gauge how a person’s connectedness to others may influence judgments about that person’s likelihood of generating creative ideas.

Across studies, they examined whether different behavioral cues signaling that a person was more connected or less connected to others influenced judgments of their creative potential. For instance, in one experiment, they found that eating lunch alone rather than with others boosted evaluations of a target’s creative potential. In another experiment, they found that in a job interview situation, interviewees who emphasized leisure activities they engaged in alone were seen as having more creative potential compared to interviewees who emphasized leisure activities they engaged in with others.

Furthermore, Proudfoot and Fath found that the tendency to associate separateness from others with creative potential wasn’t simply about assuming that loners have more time to spend on generating creative ideas, or tend to be weirder than more socially connected people. They found, for instance, that their effects held when experimentally controlling for how non-normative a person was.

“What our studies demonstrate is when evaluating another person’s creative potential, people tend to look for signals that the person is somewhat isolated from the influence of others—this seems to convey that the person is more likely to come up with truly novel ideas.”

“Our findings are interesting given that there’s quite a bit of research already out there showing that connections to others often enhance a person’s creativity, rather than hinder it,” Proudfoot said. “As such, one key takeaway from our findings is that they suggest some potential misalignment between common beliefs about what makes workers creative and the actual factors that facilitate creativity, illuminating potential challenges in how individuals and groups go about deciding who should be given creative tasks and how creative work should be completed.

“Another key takeaway is that while social connections are generally beneficial at work, if you want to be seen as a creative thinker or have your creative ideas noticed, you may want to emphasize your independent side, rather than your social side.”