An expert on international protections for domestic workers will speak at ILR’s annual Alice Cook-Lois Gray Distinguished Lecture on Oct. 15. 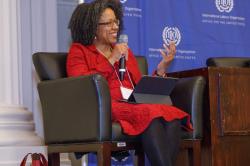 McGill University Professor Adelle Blackett, who was the International Labor Organization’s lead expert in efforts to set decent work standards for domestic workers, will deliver ILR’s annual Cook-Gray Lecture from 4:30 to 6 p.m. Oct. 15. The Zoom event is free and open to the public.

The International Labor Organization's Decent Work for Domestic Workers' Convention No. 189 and its accompanying Recommendation No. 201 created the first comprehensive international standards to extend protections and rights to domestic workers laboring in homes around the world.

During the ILR lecture, Blackett will discuss the convention’s impact on household workplace laws and the protection of domestic workers’ rights, and what the future might hold for an inclusive, transnational vision of labor law.

The annual lecture, named for deceased ILR faculty members Alice Hanson Cook and Lois Spier Gray, is organized by Rosemary Batt, the Alice Hanson Cook Professor of Women and Work, and Pamela Tolbert, the Lois S. Gray Professor of ILR and Social Sciences. The goal of the annual event is to advance the social justice and equality visions of Professors Cook and Gray, whose international reputations for scholar-activism have inspired generations.  This year’s lecture is co-sponsored by the Center for the Study of Inequality and the Feminist, Gender & Sexuality Studies Program.

Blackett is an elected member of the International Academy of Comparative Law and appointed member to the Human Rights Experts Panel of the Canadian Court Challenges program and the Canada-European Union Trade Agreement’s roster of experts for dispute resolution under the trade and labor chapter.