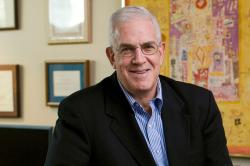 The annual Bartle Award recognizes graduates of Binghamton University who have given back substantially to the university and its community, as well as contributed significantly to their own fields of expertise.

Ehrenberg, who graduated in 1966 from Binghamton with a degree in mathematics, is Cornell’s Irving M. Ives Professor of Industrial and Labor Relations and Economics, director of the Cornell Higher Education Research Institute, and a Stephen H. Weiss Presidential Fellow.

Ehrenberg has been awarded the Society of Labor Economists' Jacob Mincer Career Achievement Award and the Association for the Study of Higher Education's Howard Bowen Distinguished Career Award. He has received honorary doctorate degrees from the State University of New York (SUNY) and Penn State. In October, the ILR School created the Ronald G. Ehrenberg Professorship in Labor Economics to honor him for his accomplishments.

A gubernatorial appointee to the SUNY Board of Trustees, he chairs the Academic Affairs Committee of that board.

With Randy Ehrenberg, his wife and fellow Binghamton alumnus, Ehrenberg established the Judith and Seymour Ehrenberg Endowed Scholarship, which benefits Harpur College students of limited financial needs. They also established the Eric Lawrence Ehrenberg Memorial Award at Binghamton, in honor of their son, who died in 2008. The award is for graduating seniors who have overcome serious health problems or other adversities. The couple also supports the Economics Department Undergraduate Research Fund and the Binghamton Fund for Harpur College.