The Paradox of Corporate Globalization

Konvitz Lecture to be given by political scientist John Ruggie on Sept. 26 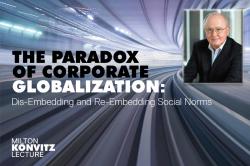 John Ruggie, the American political scientist that first used the term “embedded liberalism,” will give this year’s Milton Konvitz Memorial Lecture at 4:30 p.m. on Sept. 26 in 105 Ives Hall.

The lecture, “The Paradox of Corporate Globalization: Dis-Embedding and Re-Embedding Social Norms,” will address the “Statement of Purpose of a Corporation” issued by the U.S. Business Roundtable in August.

In the statement, the CEOs of 200 of the nation’s largest corporations committed to lead their companies for the benefit of all stakeholders—customers, employees, suppliers, communities and shareholders – a change from the recent norm in which the shareholders mattered above all others.

Drawing on his path-breaking academic and policy work in this space, Ruggie, the Berthold Beitz Research Professor in Human Rights and International Affairs at the Harvard Kennedy School, will discuss what should be made of this new development and how it fits in the broader context of corporate globalization.

A livestream of the lecture will be available by clicking here.

The Konvitz Lecture is named for the late Professor Milton Konvitz, a founding ILR faculty member who taught at Cornell for nearly three decades and inspired thousands of students, including U.S. Supreme Court Justice Ruth Bader Ginsburg ’54, with his popular course “American Ideals.”

The lecture is supported by Irwin Jacobs ’54, BEE ’56 and Joan Jacobs, HE ’54 and is co-sponsored by The Mario Einaudi Center for International Studies.