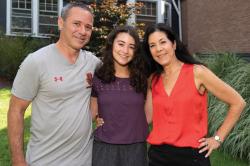 For Dawn Levy-Weinstein ’88 and her husband, Adam Weinstein, CHE ’88, once was not enough.

Now, they have created the Dawn Levy-Weinstein and Adam Weinstein Scholarship, specifically for ILR students.

“Dawn and I share a passion for increasing diversity and providing opportunities for upward mobility through education,” Adam said. “Too many students are unable to access educational opportunities because of financial challenges. We’re delighted to help solve this dilemma on a long-term basis, one student at a time, through endowed scholarships at Cornell.”

“Cornell is a special place for our family,” Dawn said. The couple met on campus as first-year students. Daughter Katie is a sophomore in the College of Human Ecology; son Spencer graduated from the College of Arts and Sciences in 2019 and son Trevor is a senior in high school.

After earning a law degree at Hofstra University, Levy-Weinstein served as an associate attorney for Raff & Becker LLP in New York, practicing labor and employment law, and was a labor relations specialist for SUNY Downstate Medical Center.

She left the workforce for several years to raise children, returning in 2017 as an attorney in The Law Office of Delmas A. Costin, Jr.; Costin is a 1993 ILR grad.

“We clicked right away, and I think it was because of our ILR connection,” she said. “We have that same educational background, and that same commitment to helping employees whose rights have been violated.”

As she became more involved with the ILR Alumni Association, Dawn noticed the need for a women’s group. In 2016, she founded the ILRAA Women’s Council, which she has chaired ever since. The group meets twice a year at the ILR New York City Conference Center and is open to ILR alumni, students and guests.

Absetou Diakite ’21, who plans to become a social entrepreneur, owes her 2018 summer job at Costin’s law office to a Women’s Council meeting she attended that spring – and to the connection she made with Dawn.

“I was blessed to work in an environment with supportive mentors who showed a dedication to my learning and growth,” Diakite said. “Delmas and Dawn showed me what great and effective leaders and mentors look like. I hope to pay it forward someday and provide an opportunity for others as they did for me.”

Among other volunteer activities, Dawn serves on the board of directors of the ILR Alumni Association, as a Cornell Alumni Admissions Ambassador and, with her husband, on the Cornell Parents Committee.

“You get involved with one thing, and then something else, and it just kind of grows,” she said. “I enjoy giving back to the school.