Al Davidoff ’80 was working as a custodian on campus his freshman year when his interest in worker rights was ignited. He saw that workers weren’t being paid a livable wage, and has gone on to become a leading figure in the American labor movement. 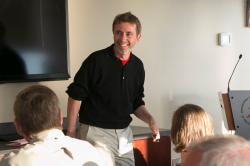 Labor leader Al Davidoff ’80 is right where he belongs: working for the Solidarity Center, the global worker rights organization aligned with the AFL-CIO.

Davidoff has also defended workers’ rights in the United States—beginning at Cornell in1976, while he was a student.

Employed as a custodian to help with tuition, “I saw workers on campus weren’t being paid a livable wage,” Davidoff said. He noticed women and workers of color at Cornell tended to be at the bottom of the employment ladder. He also saw workers starting to organize.

“I became so impressed with these emerging activists that I wanted to be as much a part of that campaign as possible,” he said. He developed into a student leader, heading ILR’s student government, then stayed after graduation to “help build a union from scratch.” In 1981, Local 2300 UAW was voted in by 1,100 Cornell service workers. Davidoff, just 23 years old, was elected president. “Other than the birth of my children, there is no day in my life that was more dramatic and bursting with hope and potential,” he said.

Then, he joined Randi Weingarten ’80 at the American Federation of Teachers. During his three years there, Davidoff launched a community outreach team that brought together teachers, parents, students, labor and community.

Davidoff, who maintains strong ties with ILR, and helps lead The Worker Institute’s National Labor Leadership Initiative, says American unions are under attack, but there are reasons for hope.

Mentioning Black Lives Matter, the resurgent women’s movement and campaigns for sensible gun control and immigrant rights, he said, “There is more energy and activism now to create a fairer society than at any other time in my life.”

“Early on,” Davidoff said, “I learned that when working people have a real opportunity to get involved in something important, guess what? They will.”