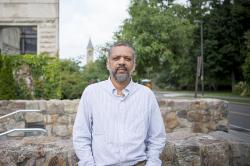 “Thanks to the generosity of Elyse and her family, we are able to provide top academics like Sarosh the resources to flourish as scholars and teachers, while simultaneously honoring a remarkable person – Andy Nathanson,” said Kevin Hallock, ILR’s Kenneth F. Kahn ’69 Dean and Joseph R. Rich ’80 Professor.

“I am grateful to the Nathason’s for their exceptional commitment to ILR, and proud to have such an expert on labor in Asia as Sarosh on our faculty”.

Much of Kuruvilla’s research focuses on how labor and human resources policies in Asian countries have changed over time and in response to globalization, and the roles these policies play in a nation’s economic development.

His work includes research on the refocusing of labor law in the Philippines, outsourcing industry skills and changes in India, strikes and collective bargaining in China and HR forecasting in Malaysia.

In the 1990s, Kuruvilla researched Singapore’s tripartism and skills development system, which has been integral to the nation’s advancement, becoming one of Asia’s richest nations.

That research was acknowledged with an invitation to speak on a panel celebrating Singapore’s 50th anniversary as a nation. Other speakers included the Prime Minister of Singapore, The Director-General of the ILO, and Singapore’s Minister for Human Resources.

As academic director of ILR’s New Conversations Project on sustainable labor practices in global supply chains, he has been researching private regulation – codes of conduct and auditing – and compliance trends in the global apparel industry.

One of Kuruvilla’s new research projects is on post-1990s jobs of visual effects professionals in the film industry.

Kuruvilla has been an ILR faculty member for 26 years and says he is gratified by the growing number of students who are interested in global issues as he has consistently worked to incorporate a global dimension to an ILR education.