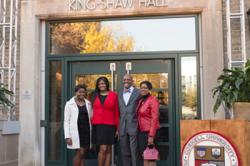 Rubén Jose King-Shaw, Jr., '83, says his family shares these values with the ILR School and Cornell University. "So, why wouldn't we want to do something big for a place we love so much?"

He delivered those remarks Thursday at the dedication of the newly-named Patricia G. and Rubén Jose King-Shaw, Jr. Hall.

Patricia, daughters Alexandra "Lexi" '15 and Angelica, family, friends, members of the ILR and Cornell communities, and university dignitaries gathered for the celebration at the Garden Avenue entrance of King-Shaw Hall. The building houses the ILR conference center.

Rubén said it was important to support ILR now in this way because the school's teaching, research and outreach focus on the most critical issues of the day.

"The world needs leaders, and ILR trains leaders. The world is concerned about creating jobs and resolving conflict, and ILR addresses these things."

President Emeritus Frank H.T. Rhodes, who also spoke at the event, said this was a "very special day, important in the history of ILR and the greater history of Cornell."

Rhodes met the King-Shaws when the couple first started to get involved in alumni activities and "began their formative partnership with Cornell." He said what's most remarkable is not just their "generosity of resources, but of their time and engagement."

Harry Katz, ILR's Kenneth F. Kahn Dean, said that the naming of King-Shaw Hall is fitting because of the parallels that exist between the activities that take place in the building and in the lives of Rubén and Patricia.

"What a wonderful building to be named for Rubén and Patricia King-Shaw," he added.

As Rubén reflected on how they hope this gift will continue to advance Cornell's "any person, any study" mission, he shared his thanks with "our grandparents and all the people who came before us who made our lives possible."

"We believe in the future," Rubén said. "I'm happy that our name will now be tied forever to Cornell and ILR, not just for this generation, but for generations to come."

Rhodes also had thanks of his own to share with the King-Shaws.

"We thank you so much for renewing ILR with your generosity, your commitment, but most of all, your love."