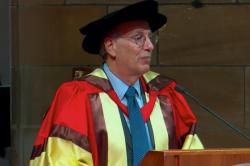 Professor Harry Katz received a doctor of science in economics from the University of Sydney Business School this month.

Katz, who began teaching at ILR in 1985 and served as Cornell’s interim provost from November 2014 to August 2015, is the Jack Sheinkman Professor of Collective Bargaining.  A U.S. labor-management authority expert, he has particular expertise in the international and domestic automobile and telecommunications industries.

A former dean of the ILR School, Katz recently completed a term as president of the Labor Employment Relations Association and was voted president-elect of International LERA, a term he begins in 2021.

While in Australia, Katz served as the keynote speaker at the Joe Isaac Industrial Relations Symposium, hosted by Monash University and the University of Melbourne.