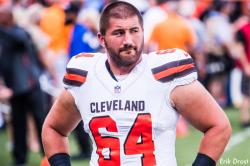 The National Football League Players Association has announced that JC Tretter ’13 was elected by the board of player representatives as its newest president.  Tretter replaces sitting president Eric Winston, who was not up for re-election after not playing in 2019.

A fourth-round draft pick in 2013, Tretter has been a starter for the Cleveland Browns for the past three seasons after spending the first four years of his career in Green Bay. He has served as the Browns’ NFLPA representative in each of the past two seasons.

Last week, Tretter attempted to help educate his fellow players on several of the nuances of the potential new collective bargaining agreement, for which voting is ongoing. More than 2,000 members of the union are voting on the CBA, which is 439 pages. A simple majority is required for ratification.

"My goal is solely just to try to educate as many guys on the issues and then let people make their decision for themselves," Tretter told the Buffalo News. "Because I do think it is a truly important decision to make and it's one that will have long-term impact on each individual in this game, as well as the game itself. And I want each person to kind of make that decision based off what they feel is best for themselves and I don't want to push them 'yes,' I don't want to push them 'no.'"