International Labor Challenges Will Be Examined at Transatlantic Social Dialogue

Panelists at an event co-sponsored by ILR will discuss new social movement and policy strategies to improve access to high quality work and to organize new forms of solidarity in divided societies. 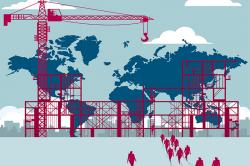 A team from the ILR School’s Worker Institute and International and Comparative Labor Department are co-organizing an annual conference in Europe that works to strengthen transatlantic labor partnerships.

The 17th annual U.S.-European Transatlantic Social Dialogue, hosted by the European Trade Union Institute and co-sponsored by the Worker Institute at Cornell and the Hans Boeckler Foundation in Germany, will be held June 20 to June 22 in Brussels, Belgium.

Virginia Doellgast, associate professor and chair of ILR’s International and Comparative Labor Department, is one of the co-organizers. “The Transatlantic Social Dialogue provides labor activists, trade union leaders and labor scholars with the chance to share knowledge and strategize about how to respond to the challenges and opportunities facing the international labor movement,” Doellgast said. “The conference brings together practitioners and academics from the United States, Germany, United Kingdom and other European countries for an exchange of research, ideas, insights and experience.”

Lowell Turner, former Worker Institute academic director and an emeritus professor of international and comparative labor, and Lee Adler, senior extension associate, were among the leadership team that helped launch the event in 2002. The goal was increasing and strengthening existing transatlantic labor partnerships. The conference is committed to discussing the challenges facing trade unions and exchanging ideas and strategies for developing solutions.

The theme of this year’s Transatlantic Social Dialogue is ‘just transitions’ to a sustainable economy and society. Panelists will discuss new social movement and policy strategies to improve access to high quality work and to organize new forms of solidarity in divided societies.

Lara Skinner, executive director of the Worker Institute and the chair of the institute’s Labor Leading on Climate Initiative, will chair the session, “Labor and the Climate Crisis: Lessons Learned from Union Campaigns to Secure Good Jobs, Strong Climate Action, and Effective Just Transition Programs.” The session will explore how unions on both sides of the Atlantic are addressing climate change and the need to transition to a low-carbon economy and society. Union campaigns in New York, Germany, the United Kingdom and Belgium to secure high-quality employment in new clean energy sectors, like solar and wind energy, will be featured.

Ian Greer, senior research associate with the ILR School, will speak in the session on “The platform economy, algorithmic management and workers’ resistance,” which will include presentations on union strategies toward Amazon and grassroots organizing by food delivery workers around Europe.

Sanjay Pinto, a fellow with the Worker Institute, will speak during the session, “Alternative Models of Ownership, Sustainability, and Just Transition, which will focus on worker cooperatives and community control.

Maite Tapia Ph.D. ’13, assistant professor at the School of Human Resources and Labor Relations at Michigan State University, is a part of the Transatlantic Social Dialogue organizing team as part of her role as a Worker Institute fellow.

The opening sessions will examine the political situation more broadly, including prospects for Social Europe after the European election and local progressive policies in the US. Other sessions will feature discussions of campaigns across European transnationals and organizing precarious and migrant workers.

The European Trade Union Institute in Brussels and the Hans Bockler Foundation (Hans Bockler Stiftung) in Germany are also co-sponsors of the conference.