In the Konvitz Memorial Lecture, political scientist John Ruggie addressed the crisis of increased corporate globalization and what can be done to combat its effects. 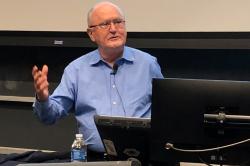 In his talk “The Paradox of Corporate Globalization: Dis-Embedding and Re-Embedding Social Norms,” Professor Ruggie provided background on the surge of corporate globalization, which increased by 1,042% from 1970 to 2010, before addressing the crises that globalization has created and the steps that have been taken to remedy those difficulties.

For years, Ruggie has worked with the United Nations to establish principles for corporate responsibility for human rights and convince them to enforce those responsibility.  In 1997 he was appointed by then Secretary-General Kofi Annan to establish and oversee the UN Global Compact, now the world’s largest corporate citizenship initiative, before spending six years working on a set of guiding principles: “Codifying and Disseminating International Human Rights Norms for Corporate Conduct.”

In the lecture, Ruggie addressed the “Statement of Purpose of a Corporation” issued by the U.S. Business Roundtable in August.

In that statement, the CEOs of 200 of the nation’s largest corporations committed to lead their companies for the benefit of all stakeholders—customers, employees, suppliers, communities and shareholders – a change from norm that has dominated corporate decision making since the 1970s that their only responsibility is to maximize returns for their shareholders

Ruggie discussed a range of explanations for this shift – including the skeptical view that it was done for public relations reasons or in light of a potential democratic win in the presidential elections.

The lecture can be viewed by clicking here.