The ILR School’s Extension Division was well-represented at the SOMOS conference, held March 6-8 in Albany. 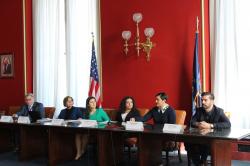 Sponsored by the Puerto Rican/Hispanic Task Force of the New York State Legislature in collaboration with the New York City Chapter of the Labor Council for Latin American Advancement (LCLAA-NYC), SOMOS brings together hundreds of Latino/a worker and community advocates, representatives of public and private sector entities, and policymakers. The weekend long conference celebrates accomplishments, recognizes outstanding activists, and allows attendees to discuss how to prepare for the challenges ahead.

Worker Institute associates Maria Figueroa, Anna Rivera, and Linda Donahue were joined by Tim McNutt of the Criminal Justice and Employment Initiative to attend workshops and distribute information about our Extension and Outreach programs. All were delighted when the Worker Institute got a shout-out from the podium on two different occasions, recognizing our labor education work with LCLAA-NYC and, separately, when an award winner's graduation from the Union Leadership Institute was noted among her achievements.

Maria Figueroa was among the distinguished panelists at a workshop organized and co-moderated by Senator Jessica Ramos, NYS Senate Labor Chair, and Assemblywoman Nathalia Fernandez. The workshop examined practices and policies concerning the gig economy. Figueroa spoke to the question of who is an employee and who is legitimately an independent contractor, particularly when digital platforms are intermediaries.

Other panelists included Mike Neidl of the NYS AFL-CIO, Rafael Espinal of the Freelancers Union, and a freelance worker. The panelists acknowledged the difficulties state legislatures have when attempting to extend employment rights to workers in a manner that is fair to those doing freelance work. Figueroa stressed the importance of providing enforcement agencies with the resources needed to protect all workers from the exploitation and abuses that arise when misclassification, wage theft, and unstable scheduling victimize New York’s workers.

SOMOS provided an excellent opportunity for outreach to sister and brother activists and policymakers among New York’s Puerto Rican, Hispanic and African-American communities. Education is a two-way street, and SOMOS was a boulevard!