New research by ILR Associate Professor Emily Zitek indicates that people with a higher sense of entitlement get angrier than others after experiencing bad luck. 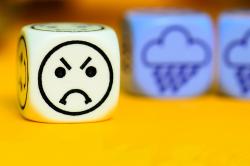 “I think our research has some interesting implications for organizations,” said Associate Professor Emily Zitek. “There is a lot of interest in the workplace about how to deal with entitled employees. A key point of this research is that entitled people might get angry when they don't get their way, even if most other people wouldn't find the situation angering. So, a manager might think that a fair way to divide limited resources would be to do a random drawing, but entitled people might still get angry if they have bad luck in this random drawing.”

According to the authors, “Anger is often described as an emotion that arises when a person experiences a negative outcome for which someone else was responsible. Simple bad luck, without an intentional agent clearly responsible for one's misfortune, should therefore not usually engender anger. However, we predicted that individuals higher in psychological entitlement, with their high expectations for personal outcomes and tendency to moralize them, would be more likely to experience anger after bad luck as compared to individuals lower in psychological entitlement.”

In all three studies, participants were asked to complete the Psychological Entitlement Scale, the most commonly used measure of the entitlement disposition, and in both Study 1 and Study 2 participants took the Ten-Item Personality Inventory, indicating whether certain characteristics (e.g., “sympathetic and warm”) described them.

For the first study, Zitek and Jordan told participants that they were interested in how people responded to having good or bad luck and that they were going to randomly assign the participants to a fun task – rating comic strips – or a boring task – counting letters in a paragraph – based on the virtual roll of a die. Each participant was then explicitly told they had “bad luck” and had been assigned to the boring task.

“In sum, this study showed that, consistent with our predictions … people higher in psychological entitlement felt angrier after experiencing bad luck from an ostensibly random, computer-generated system,” the authors wrote. “They expected better luck and then perceived it as more of an injustice when they had bad luck.”

In the second study, participants were randomly assigned to recall and write about a time when they had bad luck, where nobody was to blame, or a time when they were treated unfairly by somebody.

The results of this study showed there was a significantly stronger relationship between entitlement and anger when recounting bad luck as compared to unfair treatment.

“Put another way,” the authors wrote, “participants who were more entitled responded more similarly in terms of their anger regardless of whether someone else caused their bad outcome.”

In the final study, the duo assessed whether more entitled individuals also felt angry after bad luck affected someone else, or if they only felt angry after bad luck affected them personally. In addition, they also examined pity, hypothesizing that individuals higher in psychological entitlement tend to be more selfish, less empathetic, and less compassionate, and therefore might not feel as bothered by bad luck suffered by someone else.

For the study, participants read scenarios about bad luck that befell them or someone else.

The bad luck scenario asked the participants to imagine that they are scheduled on a flight that is cancelled due to bad weather. Another flight to the same city has an extra seat and is departing soon, but the airline randomly selects a different passenger, stranding the participant overnight.

The researchers then reversed the scenario, making the participant the lucky one to get randomly selected for the flight.

As the duo predicted, entitlement was related to anger only when the bad luck harmed the participant rather than someone else. Also, individuals higher in entitlement reported decreased pity when others experienced bad luck.