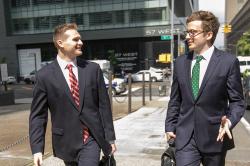 Chris Rogers ’19 and Nick Martin ’19 worked this summer as interns on a concept to help young adult autistic students transition more smoothly from college to the world of work.

For the neurodiversity project, Rogers and Martin worked with five City University schools: the Borough of Manhattan College, Brooklyn College, College of Staten Island, Kingsborough Community College and LaGuardia Community College. Each has a program called REACH -- Resources and Education on Autism as CUNY’s Hallmark -- which offers assistance to autistic students. In 2014, the Centers for Disease Control estimated that one in 59 children were diagnosed with autism spectrum disorder.

“CUNY is remarkable because of the immense support systems it already had in place,” Martin said. “[But] it also made sense to do a hub here, since colleges have autistic students searching for employment.”

Rogers and Martin provided City University with a gap analysis identifying challenges a hub might face, and the merits of keeping a program afloat. The students traveled to every New York borough to interview university personnel, and autistic students and their parents.

Thanks to other internships the students completed before CUNY, they hit the ground running.

In the spring, Rogers spent 14 weeks through ILR’s Credit Internship Program at DXC Technologies in Melbourne, where he helped pilot a similar neurodiversity hub for the Swinburne University of Technology. DXC also provided funding for the related CUNY-based internships.

“One important thing I learned in Melbourne is to not forget that the primary focus is providing students with support in all aspects of their college education,” Rogers said. “That means not just academics and career search, but students’ physical and mental health.”

While Rogers was at DXC, Martin was taking advantage of a related ILR credit internship opportunity at Microsoft headquarters in Seattle. In a fully operational program for autism spectrum disorder employees which has been in place there since 2015, Martin helped with its daily operations and with the company’s Autism at Work Summit in April, which welcomed more than 200 attendees.

“Working at Microsoft helped me see what policies and practices are successful within companies,” he said. “It also gave me the chance to work on the employer end of the hiring equation.”

The neurodiversity hub might also be an effective trickle-down tool for autistic adults who are cognitively unable to attend college.

Michael Sweeney, MBA ’89, commented on the impact the hub could have for his 20-year-old son Dustin, who is low-verbal autistic.

“Being employed by a corporation that’s investing in this kind of program isn’t going to work for my son. But, I think there could definitely be a plan, down the line, where these companies can demand that through their outsourcing contracts, my son could garden or be part of a cleaning service. There would be work for him right away.”

At the end of their summer internships, Rogers and Martin submitted a report outlining their research findings. The college asked them if a hub could work.

“We think it can,” Martin said.

The internships of Rogers and Martin were facilitated by Susanne Bruyère, director of the ILR School’s K. Lisa Yang and Hock E. Tan Institute on Employment and Disability and a professor of disability studies; she created a series of internship opportunities for ILR human resource-interested students to learn more about business-driven Autism at Work programs in the U.S. and abroad.

“The focus of these internships is to assist students in learning directly from the companies about employment processes leading to successful programs for employees with autism.”

“These efforts have been spurred by the Yang-Tan Institute’s long-standing focus on workplace disability inclusion. Company willingness to allow our students to learn directly from business experience equips students with close-up knowledge that will enable them to bring these innovations to their employers after graduating.”

Learn more about the Yang-Tan Institute.