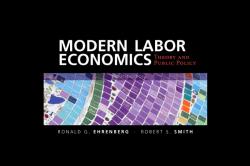 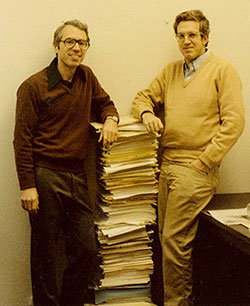 Thousands of people around the world have been educated with a textbook written by two ILR professors.

Modern Labor Economics: Theory and Practice, authored by Ronald Ehrenberg and Robert Smith, is in its 12th edition and fourth decade.

More than 150,000 copies have been sold in six languages: English, Russian, Hungarian, Korean, Chinese and Portuguese. It is also available in a digital format.

Both professors began their careers at Cornell in the mid-1970s and, as Ehrenberg explains, “There was no text that focused on modern labor economics and emphasized the public policy implications of labor market models.”

“Our intent all along was to focus on the usefulness of labor market theory in addressing labor market policy issues such as minimum wage, occupational safety and health and the impact of welfare programs on work effort,” he said.

Smith said that in the 1970s, “Most textbooks in the field were primarily descriptive and contained little economic theory; that is, they were more ‘labor’ than ‘economics.’”

“Our idea was to take the theory of labor economics and demonstrate to the reader how that theory can be applied to analyzing public policy in the labor market,” he said.

For the first edition of the book, each professor’s work was focused on his areas of expertise: Ehrenberg wrote about labor demand and Smith complemented it with labor supply. Smith worked on occupational choice and compensating wage differentials. Ehrenberg discussed unions and collective bargaining.

Each professor produced his own chapters, then submitted it to the other for comments.

The book was published about two years after its conception and is revised every three years.

That process takes several months and includes updates reflecting social and economic changes across the world, as well as developments in the field of labor economics, said Smith, who has handled revisions since the late 1990s.

“While earlier labor texts would typically have a cover depicting a factory, our cover has always been adorned with artwork that emphasizes the ‘modern’ in ‘Modern Labor Economics,’” Smith said. The 7th edition cover, for example, featured a work by Roy Lichtenstein, a leader of the pop art movement.

Beyond academia’s embrace of the book, Ehrenberg said, “The most important thing is that ILR students have been able to benefit from a book written explicitly for them.”