ILR Alum and Wife Build a Bridge to Better Breastfeeding 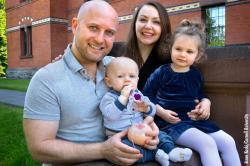 As a physician assistant and lactation consultant at Northeast Pediatrics in Ithaca from 2012-14, Kate Spivak talked to many new moms who struggled with the pressures they felt about breastfeeding.

New moms read about breast milk’s benefits to their baby’s health and the bonding experience of the process. But for many moms, it doesn’t come easily. Spivak was shocked to learn than only 25 percent of new moms in America are exclusively breastfeeding at six months.

“A lot of breastfeeding is so emotional. It’s more than just feeding your baby,” Spivak said. “Moms feel so let down when they can’t do all that they need to do.”

So, she and her husband, Max Spivak ’07, MBA ’14, MILR ’15, have launched a company, Laally, to manufacture and sell Kate’s invention, the Bridge, which helps moms who have low milk supply through the use of at-breast supplementation. According to the Spivaks, the product brings lactation solutions to parents who might not seek professional support and thus give up breastfeeding.

Now working and living in New Jersey, the couple was on campus with their two young children in June for Reunion weekend.

“A lot of lactation consultants use a complicated tube system that works well, but moms can’t do it on their own,” Kate said. After the baby latches onto a nipple shield, she said, a tube is carefully inserted into the baby’s mouth. “I figured there had to be an easier way.”

Her device includes a thin silicone, breast-shaped cover with a built-in tube that allows moms to attach a syringe filled with additional breast milk or formula.

“You can use this short term or long term,” she said. “Instead of giving the baby a bottle, just fill this up and give the milk directly at the breast.”

The device can also be helpful for non-birthing parents, transgender couples or couples using donated milk, she said. Part of the company’s mission is to help improve global breastfeeding rates and help parents feel less judged in their parenting choices.

Laally was incorporated in July 2018. Max is now working on it full time; Kate is CEO of the company but continues her work as a physician assistant. They have received lots of support from Cornell alumni, who have introduced them to company contacts and helped with crowdfunding.

Max said his entrepreneurial spirit was fostered when he came to this country as an immigrant from St. Petersburg, Russia, at age 6. Kate also immigrated from Russia, coming from Norilsk when she was 11.

“Both of my parents were doctors in Russia, but when they came here, they had to restart their entire lives,” Max said. “I watched them hustle and bustle and it was very inspiring. That drive was always there.”

An ILR major, he had an internship with Deloitte Consulting the summer after his junior year, then got a job on Wall Street after graduation. After that job, he became interested in health care and started working with a CEO of a group of pharmacies.

“I learned how to take risks,” he said. After returning to Cornell for his MBA, he landed a job at McKinsey & Co., but after the birth of his children, he decided it was time to work on his own company, so he and Kate launched Laally in 2017.

They visited 33 manufacturers before finding one to create the Bridge. Along with spreading the word to U.S. parents, the pair also hope to get the device to women in developing countries, where alternatives to breastfeeding are often more limited than they are in the U.S.

“Our goal for the next year,” Kate said, “is to help as many moms as possible.”

Kathy Hovis is a writer for Entrepreneurship at Cornell.