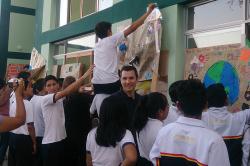 Government officials in Peru were worried they had an insurmountable problem: provide affordable health care to 1.1 million low-income residents in the Piura Region.

But, that was before IBM top talent, including Jonathan DeGraff, MILR/MBA ’12, got involved.

DeGraff was part of a team of 15 that spent four weeks in the coastal region. He was dispatched as part of IBM’s Corporate Service Corps, a program inspired by the Peace Corps that sends global teams to conduct pro bono consulting work with governments, nonprofits and others to help solve problems in developing economies.

DeGraff worked with a salesperson from Sydney, Australia, and an analytics engineer from Bangalore, India, analyzing the patient registry used by 400 health care facilities.

“Through visits to several hospitals throughout the region and interviews with dozens of physicians, hospital administrators and government officials, we determined that only 24 percent of medical expense reimbursement forms were being successfully submitted to the federal government,” DeGraff said.

“We were able to pinpoint why forms were being rejected and why many weren't getting submitted at all, then advise on how to prioritize their efforts to remedy.”

Government officials estimate they will annually save 60 million sol, or about $20 million, enough to keep Piura’s largest hospitals operating for a year, he said.

“The government officials we worked with commented that before we arrived, they thought their problems were insurmountable, but they now realize their goals are attainable,” DeGraff said.

“Our client was anticipating a technological solution, but technology would only address some of the issues.”

“The multi-disciplinary training I received at Cornell helped me bring a holistic view to the case, which helped us convince the client of the need to also tackle opportunities related to people and process, resulting in a much greater and more sustainable outcome.”

When DeGraff began college, he wanted to become a doctor, but he said a career counselor helped him realize that a career in business could be just as meaningful and impactful as in medicine, if not more.

“My Corporate Service Corps experience caused my career decision to come full circle, as I was in the hospitals helping people through my expertise -- not in medicine, but in management.”

“We led group discussions, discussing their aspirations for the future and ideating together what we think the future might look like 50 years from now,” DeGraff said. “I was impressed with how eager they were to learn, as they kept pulling at our shirtsleeves and asking questions.”

The trip was enlightening, he said.

“My biggest takeaway was that hope is a tremendous export,” he said. “I had never seen a people as psychologically downtrodden as I did in Piura, and I think I somewhat took for granted the value my experiences and perspectives could have in uplifting others.”