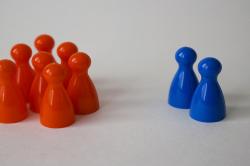 According to Sanders, “I was not surprised that political partisans – Democrats and Republicans – exhibit in-group bias toward members of their group. That is, it is no surprise that Democrats treat Democrats better than they treat Republicans, and vice versa. But, what was surprising is that our findings suggest very little of this has to do with political ideology.”

The authors, who directed a series of three in-person tests to determine “groupiness,” asked the 141 participants to allot money to themselves and someone in their group, or to themselves and someone outside their group. The tests were conducted at Duke University and participants, 76 percent of whom were Duke students, were drawn from the Durham-Chapel Hill communities.

For one test, the participants were divided into groups according to their self-declared political leanings. In another, the groups were organized in a politically neutral way based on their preferences among similar poems and paintings. In a third, the other recipients of the money were chosen at random.

The researchers found that partisans attached to the group made participants more biased against people outside their groups, regardless of the context, compared to people with similar political beliefs, but who didn’t identify as Democrat or Republican.

“It was surprising that political partisans treated in-group members more fairly than out-group members, even when groups were formed in a nonsensical way, but political independents did not,” said Sanders, who wrote paper with Duke University’s Rachel Kranton and Scott Huettel, as well as  Matthew Pease, a 2010 Duke graduate now at the University of Pittsburgh Medical Center.

“As an example, you could take people and put them in teams, the Bluebirds and the Redbirds. There is a great deal of evidence from numerous studies that even these arbitrary divisions create group alliance. That is, Bluebirds treat Bluebirds better than Redbirds, and vice versa, even if people are randomly assigned to team membership. But here is the kicker – this is true in spades for political partisans, but people who maintain their status as political independents don’t play into arbitrary group divisions. Political independents treat Bluebirds and Redbirds the same, regardless of which team they are assigned to.”

They also found that one-third of the participants were not swayed at all by group membership and that those participants were more likely to be politically independent. A final finding was that less group-minded people made decisions roughly 25 percent faster another indicator that they did not need to register group affiliation.

“What this shows is that much of the vitriol between registered Democrats and Republicans is happening because people who are attracted to being members of a group are more likely to register with a party,” Sanders said. “Since each party attracts people with a proclivity to treat fellow members better than out-group members, that is they are “groupy” people, it is likely that members of each group would rally around each other, even in the absence of a meaningful difference in, say, a policy position.

“Given this, it is understandable why it is so hard to reach across party lines.”

Study findings that helped the researchers reach their conclusions offer some peeks at behavior. Sanders explained:

“Other choices, especially when you lose money, but the other person gains money, were “harder” choices for many people because it involved a calculation of whether the other person gained enough for you to sacrifice your own earnings. So, most people were willing to give up 20 cents for their opponent to get $1, but fewer were willing to give up 20 cents for the other player to get, say, 20 cents.

“Of course, what was “easy” and what was “hard” depended on the kind of person you were. For selfish people, most decisions were easy, they just looked at what was better for themselves, and, in fact, selfish people make decisions very fast. For people who had some pro-social motivation, they had to take into account exactly what they lost and what the other person gained.