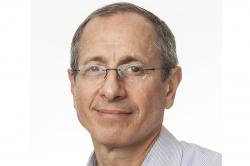 Jeffrey Grabelsky, who works with labor and unions as associate director of The Worker Institute at Cornell and director of its Construction Industry Program, shares his thoughts about labor in America: