In honor of the 125th anniversary of Buffalo’s own, President Grover Cleveland, signing the law establishing the federal Labor Day holiday in the U.S., ILR Buffalo Co-Lab has released a new report. 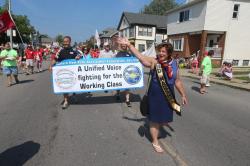 A unique contribution to the labor literature, this new report draws on national consumer survey data and employs statistical methods to show that, relative to the rest of the region’s population, labor union members in Western New York appear to be more charitable, more active in volunteering, and more likely to report that they are happy with their lives and standards of living.

Taken together, the evidence suggests that union membership might be a path to a more fulfilling, altruistic, and happy life in the Buffalo-Niagara region.