Ginsburg Impacted as Student and Jurist by Konvitz

Justice Ruth Bader Ginsburg, who died Friday at age 87, and ILR Professor Milton Konvitz were friends for decades. This week, pieces of their correspondence were uncovered at the Kheel Center. 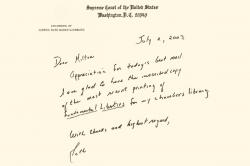 As an undergraduate, Ruth Bader, A&S ’54, was inspired by Professor Milton Konvitz, a “marvelous teacher” who introduced her to the scope of human rights as part of the “American Ideals” course for which he is legendary.

“You opened my mind to the possibility of realizing human rights at a time that was not the best for our Nation and World,” U.S. Supreme Court Justice Ruth Bader Ginsburg wrote from her chambers in 2001.

Steven Calco and Brandon Hoak ’21 this week found the typewritten note and a hand-written note from Ginsburg thanking Konvitz, a founding faculty member at the School of Industrial and Labor Relations who also served on the Cornell Law School faculty.

Calco is the archivist of the Kheel Center for Labor-Management Documentation & Archives, a unit of ILR’s Catherwood Library and part of Cornell University Library that collects, preserves and makes accessible collections pertaining to the history of the workplace and labor relations. Konvitz’s papers are archived at the Kheel Center

Another note, written by Ginsburg three days before her Supreme Court nomination by President Clinton, is part of the Kheel’s collection. It reads, “Dear Milton, A Cornellian who attended a lecture I gave this spring said: ‘She reminds me of Professor Konvitz.’ Can’t imagine a compliment higher than that. With appreciation for you, good wishes, Ruth”.

“There is something so heartfelt in seeing the great Ruth Bader Ginsburg hold her own teachers in the highest regard. And, generally, there is nothing more exciting for an archivist to discover letters from prominent figures in American history who fought for justice and against discrimination,” Calco said.

When Konvitz died in 2003, Ginsburg told “The New York Times” that she was too shy to approach him when he was her teacher. But, they later corresponded and estimated 10 to 20 times, covering subjects from privacy rights to anti-Semitism.

The Kheel Center also holds an oral history of Ginsburg that is part of its College of Labor Employment Lawyers collection. Here, William Kilberg ’66 interviews Ginsburg.

Ginsburg, who cited ILR Dean Alex Colvin’s mandatory arbitration research twice in the past three years, will lie in state in the Capitol on Friday.