New research by ILR Associate Professor Emily Zitek suggests that entitled people’s refusal to follow health guidelines is causing them to be at risk of contracting COVID-19. 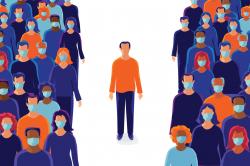 Individuals who demonstrate higher levels of psychological entitlement – the belief that they deserve more than others – indicated noncompliance with the health guidelines of the COVID-19 pandemic, according to a new paper co-authored by Cornell ILR Associate Professor Emily Zitek.

In “Psychological Entitlement Predicts Noncompliance with the Health Guidelines of the COVID-19 Pandemic,” published in October by Personality and Individual Differences, Zitek and co-author Rachel Schlund, a third-year Ph.D. student in ILR’s Organizational Behavior program, used three studies to add to the growing body of research on how personality and individual differences relate to attitudes and behaviors during the pandemic.

The results showed that entitled individuals were less likely to report that they were following, or would follow, the health guidelines of the COVID-19 pandemic, and they were more likely to report that they had contracted COVID-19. According to the paper, “Their noncompliance seemed to be most likely due to their lessened concern about harming others and their increased belief that the threat of the virus was overblown (Study 2), and appealing to their self-image concerns did not increase their compliance (Study 3).”

“Past research demonstrates that entitlement can put people at risk for psychological distress, such as anger and dissatisfaction,” said Zitek. “We have now shown that entitled beliefs can also put people at risk for physical harm when they ignore the health guidelines of the COVID-19 pandemic. Entitled people strongly want good things to happen to them and yet their refusal to follow the health guidelines is causing them to be at risk of contracting COVID-19.”

In all three studies, participants were asked to complete the Psychological Entitlement Scale, the most commonly used measure of the entitlement disposition, as well as the Ten-Item Personality Inventory, indicating whether certain characteristics such as “sympathetic and warm” described them.

For the first study, Zitek and Schlund asked participants to respond to the Health Behavior Checklist, which included questions on whether or not the individual flossed or ate a balanced diet. They were then asked five items on a scale to measure whether they were following the health guidelines of the pandemic such as  “I am engaging in social distancing,” Seven items measured concern about getting sick, three items measured a concern for others and two items measured a belief that the threat was overblown.

“As predicted, entitled people reported less engagement in behaviors such as washing their hands more often and social distancing … entitled people were less likely to be concerned about getting sick, less likely to be concerned about others, and more likely to believe the threat of the virus was overblown,” the authors wrote. “Interestingly, entitled people were more likely to report that they had contracted COVID-19, and therefore, it is possible that their noncompliance with the health guidelines was harming them. Moreover, entitlement was positively correlated with the general health behaviors from the Health Behavior Checklist. Thus, in this study, we found that entitled individuals’ refusal to follow health guidelines was specific to pandemic-related suggestions.”

In the second study, Zitek and Schlund included more pointed questions that assessed the individual’s perceived likelihood of getting sick, one’s perceived ability to handle being sick, one’s concern about harming others, and one’s belief that the threat of the virus is overblown.

In the final study, the duo attempted to entice entitled individuals to follow the guidelines by tapping into their self-image concerns. Other research has shown that entitled people care about maintaining a positive self-image, so the researchers predicted that telling entitled individuals that others admire those who follow the health guidelines and look down upon those who do not would have a positive effect on their behavior.

To do this, the researchers instructed each participant to imagine they were walking around a downtown area with a friend and then report how likely they would be to engage in nine different behaviors related to the health guidelines of the pandemic. Next, participants read a self-image prompt, which stated that most people believe that following the health guidelines is important and think positively of those who do so, and negatively of those who do not. Then participants were asked to imagine they were invited to a party, and then were asked whether they would engage in the nine behaviors there.

“Our attempts at encouraging the entitled people to follow the health guidelines by telling them that they would be looked at positively by others if they followed them, and negatively if they did not – our self-image prompt – did not work,” said Zitek. “In retrospect, they may have felt that our self-image prompt was simply more propaganda from people who are making too big of a deal about the virus. The entitled people may have read the prompt and thought that they weren't going to listen to the opinions of people who are taking the virus too seriously.”