Part of the ILR School for more than 50 years, Sandy Lipsky was a touchstone for faculty, students, alumni and staff. 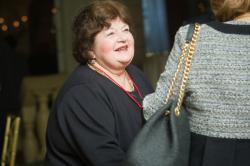 Time for a chat.

“She would always know exactly where I was in my research and want to talk about what I was writing. Along with much appreciated words of encouragement came a massive smile, making Sandy’s Wegmans ‘office hours’ essential to attend,” he said in an interview.

“Over the years, I found I was not the only one who took advantage of Sandy’s 'office hours.' ILR students, faculty and staff alike would often recount similar stories of their days brightening as soon as they saw Sandy,” said Dickey, now an assistant professor in Syracuse University’s Department of Public Administration and International Affairs.

Sandy Lipsky became part of ILR when her husband, Professor David Lipsky, joined the school’s faculty in 1969. Sandy, who died in April, was a mainstay at ILR functions, collecting friends in every corner. At the Groat & Alpern Celebration, ILRies of all ages stood in line to say “hello.”

“At any ILR event she attended, people flocked to see and talk to her. She was such a great person to talk to and she was someone I admired and respected for her warm and welcoming personality," said Melissa “Missy” Harrington, who for 28 years worked as an executive staff assistant alongside Professor Lipsky, the Anne Evans Estabrook Professor of Conflict Resolution, and the founding director of the Scheinman Institute. He also served as dean of ILR, where an Ives Hall meeting room is named for both Lipskys.

Elaine Engst worked for decades with Sandy at the Cornell University Library Rare and Manuscript Collections.

“She was proud of the work that she did, perhaps most notably her work on the published Guide to the Frank E. and Caroline Werner Gannett Papers,” said Engst, who retired as director of the collections.

“Sandy turned the everyday trials and tribulations into funny stories, and there always were lots of “Baba” stories about her elderly mother. Sandy had incredible empathy for people, and even strangers often told her their life stories. She somehow usually made them feel better. She was the only person who still wrote me actual letters, and it inspired me to write back.”

Thomas Hickerson, who preceded Engst as director of the Rare and Manuscript Collections, and who is a former vice provost and university librarian at the University of Calgary, remembers Sandy’s welcome to him and his family, and for being “wonderfully fun.”

“She would call me over with a subtle wave and provide me with a humorous story or a tidbit of library or university intrigue. She always knew just a bit more than you did,” Hickerson said.

Marcia Hopson Earle, A&S ’81, was an undergraduate when she began working with Sandy, and treasures a photo, taken a few years later at Earle’s wedding reception, that captures Sandy’s famous eye twinkle.

Samuel B. Bacharach, McKelvey-Grant Professor Emeritus and director of the Smithers Institute, said the Lipskys welcomed him when he arrived in Ithaca from New York City to begin his Cornell career.

“Sandy and David, for many years, acted as my family. Practically every Thanksgiving, they brought over a turkey in the pan, and we would celebrate the holiday together. Sandy’s warmth, and our long discussions and debates about biblical history and ethnic backgrounds, were the biggest touch of home I had in Ithaca. She was my big sister, and David is a brother.”

Kelly Pike, Ph.D. ’14, assistant professor of industrial relations in the School of Human Resource Management at York University in Toronto, was a graduate student when she met Sandy. “One of our first encounters was in a charming little Italian restaurant near Grand Central Station, on one of many fieldwork trips to New York City with a few colleagues from the ILR School. We sat next to each other and talked away the evening.

“Sandy made us feel like family, interested in the work we did, but also in who we were away from it all. I will always appreciate her kindness, warmth, sincerity and sense of humor. She has taught us all something about being genuine and committed, and we will miss her dearly.”

Dean Alex Colvin, Ph.D. ’99, remembered the close and long-lasting relationship between Sandy and David Lipsky, “They were high school sweethearts growing up in Pennsylvania and you could still see that in them over 60 years later. Sandy was a rock for David, as he was for her. Together, they were as warm and welcoming a couple as you’d ever met.”

“Sandy embodied being a good person, who cared for others. When you talked with her, she would inspire you to feel that you needed to be more kind and caring, too.”