The Downside of a Startup 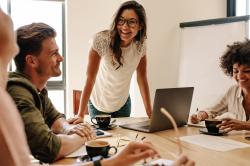 Many individuals are drawn to working at startups. They often believe that getting in at the ground level of a young company, where every job carries multiple responsibilities and provides them with a variety of skills that could not be gained at a large corporation, will help their future career prospects. They are often drawn to the camaraderie and social cohesion at small firms and also believe that if the startup does take off, they are in a position to become rich.

Despite these beliefs, a recent study co-authored by Professor M. Diane Burton, suggests that the reality is far gloomier. In “Do startup employees earn more in the long run?”, published in the January edition of “Organization Science,” Burton and her co-authors found that employees hired by startups earn roughly 17% less over the next 10 years than those hired by large, established firms.

“Students often seek advice when they are weighing different job opportunities. We realized that there was little empirical evidence to guide people in one direction or another,” said Burton. “How do you compare the pros and cons of a startup job verses an established company job? Most entrepreneurship research focuses on inventors and founders and largely ignores startup employees. Employees are essential to firm growth and success, but it was still an open question how much they benefit from the experience. The research team saw an opportunity to focus on the employees who join startups and to more fully understand the advantages and disadvantages of different career choices.”

Burton’s co-authors are UCLA’s Olav Sorenson, Aalborg University’s Michael S. Dahl and Yale’s Rodrigo Canales. This paper is a follow-up to an earlier study, "Do Start-ups Pay Less?” published in the December 2017 issue of the ILR Review that examined pay differences between startups and established firms that demonstrated that, on average, people who worked for startups earned less than their peers who worked for established firms. The research team wondered whether the lower initial startup earnings persisted over time or if they were more akin to an internship or apprenticeship that set people up for better future earnings.

To understand the long-term consequences of startup employment the authors needed to follow the progression of employees’ earnings, even if they left their startup. They turned to Denmark, which has an economy similar to many other high-income countries, including Canada and the United States, enjoys high levels of labor mobility and of industrial dynamism, and most importantly, makes detailed data available to researchers. The research team used Denmark’s Integrated Database for Labor Market Research an employer-employee database that includes all individuals legally residing in the country each year and contains information on the characteristics of individuals, on their annual earnings, as well as on the characteristics of their employers.

The authors analyzed data from 1991 onwards focusing on adults between the ages of 18 and 50 who changed employers and following them for a decade. They made adjustments for the fact that most startups hire younger and less educated people by pairing each individual who moved to a startup with two individuals who moved to large, established firms in the same calendar year. They then matched those individuals exactly in terms of gender, year of birth, years of education and prior occupation.

In addition to documenting the long-term earnings discrepancy, Burton and her co-authors explored what factors might account for the gap associated with employment at a small startup.

According to the study, “First, startup employees, particularly those who joined when the firm was still small, had less stable jobs and therefore experienced more and longer spells of unemployment. These spells led both to a short-term loss of income and to slower long-term earnings growth.”

“Second, those hired by startups before they enjoyed some success appeared to become almost trapped in small firm employment. Most startups never grow large. And, consistent with the idea that startup experience might lead to the development of human capital not valued by larger firms (Sturman et al. 2008), even when employees left small startups, they moved to other small firms. This path dependency in employer size creates a bifurcated labor market, with one set of individuals progressing through careers in large employers and a second set holding precarious positions at a series of startups and small firms.”

“We think our research offers an important caution to people enamored by entrepreneurial companies,” said Burton. “We show prospective employees that there are likely to be financial costs associated with startup employment. We also offer policy makers and local leaders a less rosy and more realistic perspective on entrepreneurship as an engine of economic development.