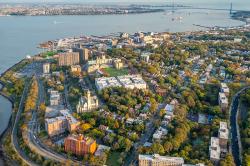 The Scheinman Institute has been engaged to study health care system transformation in Staten Island.

Harry Katz, director of the Scheinman Institute on Conflict Resolution and ILR’s Jack Sheinkman Professor of Collective Bargaining, is leading a team of faculty and staff commissioned to study and make recommendations about the preparation and deployment of the workforce and its role in the success of Staten Island’s Performing Provider System.

The team includes ILR faculty members Ariel Avgar and Adam Seth Litwin, and Outreach and extension staff member John August. The team is under a multi-year contract to conduct research studying how the workforce is integrating to meet the promises of the project. The team will study the interactions between previously non-partner providers and measure the effectiveness of training, conflict resolution and group mediation.

Integration of as many as 70 Staten Island health care providers represents a revolution in the way health care, and especially Medicaid, is delivered as it is one of the first integrations of separate providers into a collective whole.

William Myhre, director of Human Resources and Workplace Strategy for the Staten Island Performing Provider System, lauded the efforts of the Cornell team.

“John August, Harry Katz and the rest of the Cornell team have been spending a great deal of time meeting with our partner organizations to study the impact of workforce transformation,” Myhre said. “The efforts of the performing provider system to create workforce transformation across more than 70 partners is the work that Katz and August are studying.”

“The early efforts of our system, combining organized labor and higher education, have created new skill sets necessary to create transformation," he said. "In addition, our efforts have provided a basis for creating improved work processes, improved employee morale by involving staff in the review of processes and implementation of new processes.”

Around New York, health care providers are separate and disconnected from each other. Medical records are not always shared between providers. This results in more costly procedures for patients that are often redundant, unnecessary or avoidable.

August said the Scheinman Institute’s study of a transformed system will improve understanding of how care can be provided that can prevent the chronic conditions that are the major causes of poor health and unnecessary costs.

"Much of the debate around health care today does not get at the root causes of problems we face as a nation," he said.

"Americans wonder, how do we get insurance coverage and how much will it be? Access and affordability of care remain major problems for tens of millions of people. But we also must ask: what are we paying for?"

According to the New York State Comptroller’s 2015 report, “Medicaid in New York: The Continuing Challenge to Improve Care and Control Costs,” the state of health care in the Empire State is precarious. New York state consistently spends among the most on Medicaid enrollees as compared to other U.S. states, yet has health care outcomes close to the U.S. average. Medicaid accounted for about 29.1 percent of the state's expenditures between 2014 and 2015.  New York ranks 50th in avoidable hospitalizations and cost to the public, and ranks highest of U.S. states in deaths by drug overdoses.

New York state officially submitted a federal waiver, the Medicaid Redesign Team Waiver Amendment, to the federal government to invest up to $10 billion in an action plan, including the Delivery System Reform Incentive Payment Program. This waiver is a joint effort of Gov. Andrew Cuomo, the state Department of Health, health care providers and health care workforce organizations such as the Service Employees International Union and the New York State Nurses Association.

“This type of management-labor coordination and cooperation is incredibly encouraging and is fed by the shared realization that health care in this country is in a state of crisis,” he said.