For more than 10 years, the Cornell ILR Buffalo Co-Lab has sponsored High Road Fellowships, giving undergraduate students an opportunity to participate in research, engaged learning and service in community-based economic development in Buffalo. The success of that program, which has seen over 180 students spend a summer working on grassroot projects, has led to a new program – Working on Democracy: Buffalo Summer Fellowships with NYS Legislators.

“We developed the projects much like we do for High Road,” said Lou Jean Fleron, High Road Fellowship director. “We ask that it be a project that will really give the students some policy work. Our partners form a project that they want a student to do, we work with them to refine it and the student also has some input into that process.”

For Blanchard, who worked in Ryan’s office, the project provided her the freedom to create workshops based on her research. 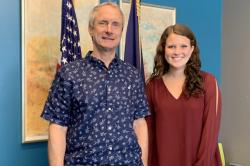 “Buffalo has a large refugee population in general and the district that Ryan represents contains a lot of them,” Blanchard said. “He gave me a broad prompt to do research on the refugee communities and see what some of the difficulties they’re facing, specifically to voting and becoming citizens. So, I created a survey, and also did some interviews to look at the question of what is difficult for these populations in becoming citizens, and then, once they are citizens, what are the barriers to voting.”

Blanchard found that the main obstacle for naturalized citizens is a lack of education on how the voting system works. Her solution was to partner with a High Roads Fellow, Livvie Smith ’22, who was placed at the Jericho Road Community Health Center, to hold a pair of voting rights workshops. The purpose was to educate those in the process of becoming citizens about their right to vote, as well as showing them the voting process.

“We even did a sample election to get them excited and encouraged about voting,” Blanchard said. “It was super cool to see them get excited about the process. And the project got me more excited about a possible future in public policy or in a politicians office.”

For Lau and Palms, much of their work centered on research and interacting with constituents. 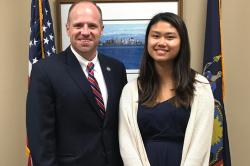 Working with Kennedy, Chairman of Committee on Transportation, Lau did research on the past 50 years of public-purpose bonds. She analyzed which bonds passed and which failed, and studied the scope of each bond, the language used, and the percentage of people voting for or against the bill. Lau also did research on the different forms of sustainable transportation in the U.S. to discern which types were utilized to promote a more environmentally friendly setting.

“Doing a lot of research on bills has made me want to focus more on policy work,” Lau said. “I feel like policy is the forefront of change. If it passes it becomes the law and I think that by helping shape policy then I can reform what needs to be changed.”

Palmer worked with Peoples-Stokes on the Marijuana Regulation and Taxation Act, which failed to land on the Senate floor before the session ended in June. People-Stokes intends to revamp the bill and push for it in future sessions, and that’s where Palmer’s research was focused.

“It was pretty close [to passing this session],” Palmer said. “I think it came down to specifically the business side of the bill. So, I conducted extra research to see how to regroup the bill for next session.”

According to all three Democracy fellows, the experience helped illustrate the possibilities of working in public service and for the greater good. For Fleron, that reaction is exactly the reason the Democracy program was created.

“The program comes from a recognition of how important public service is,” she said. “It's based on the idea that If democracy is to work, government and government service needs to be valued as an important endeavor—worthy of career aspirations.

“We wanted to give students the notion of considering public service as a career because every policy arena requires experts. Every policy concern requires informed advocates. Elective office requires leadership, which ILR develops, the leadership of representation, of coalition building and of crafting public goods.” 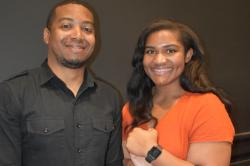