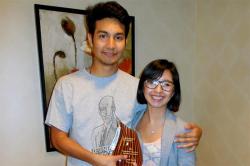 Jose Martinez ’18 and Julia Montejo ’17 advanced beyond 70 other teams to win the Spanish Grand Finals at the 2015 Pan American Universities Debate Championships in Miami, Fla.

Representing the Cornell Forensics Society’s Spanish-language team, Martinez and Montejo debated in Spanish against teams from as far away as Chile, Venezuela and Colombia, as well as other American teams.

Martinez said, “As a freshman, I am extremely excited to see what the next three years hold for me in the world of debate. Being able to compete at my first major international debate tournament was an amazing experience.”

Martinez and Montejo said they hope to defend their title next year in Jamaica.