In the latest episode of the ILR School’s podcast, Dean Alex Colvin and Tanuja Gupta discuss her role as one of the organizers of Googlers for Ending Forced Arbitration. 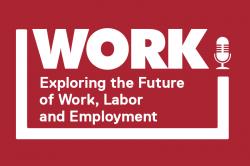 In our latest episode of “WORK! Exploring the future of work, labor and employment,” Cornell ILR Dean Alex Colvin interviews Tanuja Gupta, one of the original organizers of Googlers for Ending Forced Arbitration. The duo examines the role that Googlers played in ending the practice at their company, as well as getting the FAIR Act passed in Congress.

Gupta was one of the key organizers that arranged the Google Walkout in November 2018 and she, along with a group of co-workers world-wide, continue the fight to end the practice of force arbitration by tech companies around the world. Nearing 20 years of program, product and project management in software engineering, Gupta currently works on the News & Search team at Google. Prior to her 10 years at Google, she launched the eBooks and digital textbooks lines at Barnes & Noble along with several e-commerce initiatives at Broadway.com. Gupta also chairs the Board of the Crime Victims Treatment Center in New York.