Building on her ILR foundation, Niyyah Barber will enter a Stanford University program aimed at developing leaders who will work as a team on societal challenges. 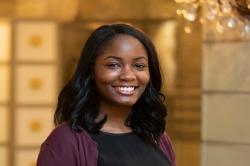 Niyyah Barber ’19 became a strong advocate for marginalized groups while studying at the ILR School, and it has given her a foundation to build on when she starts law school this fall at Stanford University as part of an elite scholarship program.

“The ILR School has given me so many unique opportunities to learn about the issues facing people with intersecting identities,” said Barber, who hopes to fight workplace discrimination with a plaintiffs’ law firm after law school. “The ILR School challenges us to be innovative and forward-thinking, and I look forward to continuing that at Stanford.”

Barber was one of the 69 students from 19 countries – out of 4,424 applicants – selected for the second cohort of the Knight-Hennessy Scholars program at Stanford. The scholars, studying in departments across the campus, receive full funding to pursue graduate or professional degrees. The scholars attend meetings, seminars and workshops, and take global study trips together. Stanford hopes the program develops a community of future global leaders who work as a team to address complex societal challenges.

“We are civic-minded and come from many different backgrounds,” said Barber, who met some of the other scholars in February. “I think the collaboration will inspire us to make positive changes.”

Barber said law school was an option when she started at the ILR School, and she decided as a junior that it was the best way for her to make a difference. She said three classes helped her make that decision: “Writing Seminar in Law,” her introduction to disability law in her sophomore year, with Lecturer Allison Weiner Heinemann; “Labor Law” with Professor Michael Gold; and “Conflict Resolution and Negotiation” with Professor Alexander Colvin, now interim dean. She has also been a writer and editor with the student-run “Perspectives,” the Cornell undergraduate disability studies journal.

“I want to work in employment law and address issues of discrimination and accommodations to help create more inclusive workplaces,” she said.

Three labor relations internships in the past two years – with the Walt Disney Company in California, the Houston Astros baseball team and the Proskauer Rose law firm in New York City – provided her experience in different aspects of labor and employment law.

Barber said she may also one day want to further explore the link between sports and disabilities. She studied inclusive youth sports programs for an ILR course and found they help change how disabilities are viewed.

“Children without disabilities in the program began to appreciate the unique ways their peers with disabilities could play sports,” she said. “I want to continue to explore different ways that sports can break down barriers. Sports are a great platform for meaningful change because they are such a big part of our culture.”